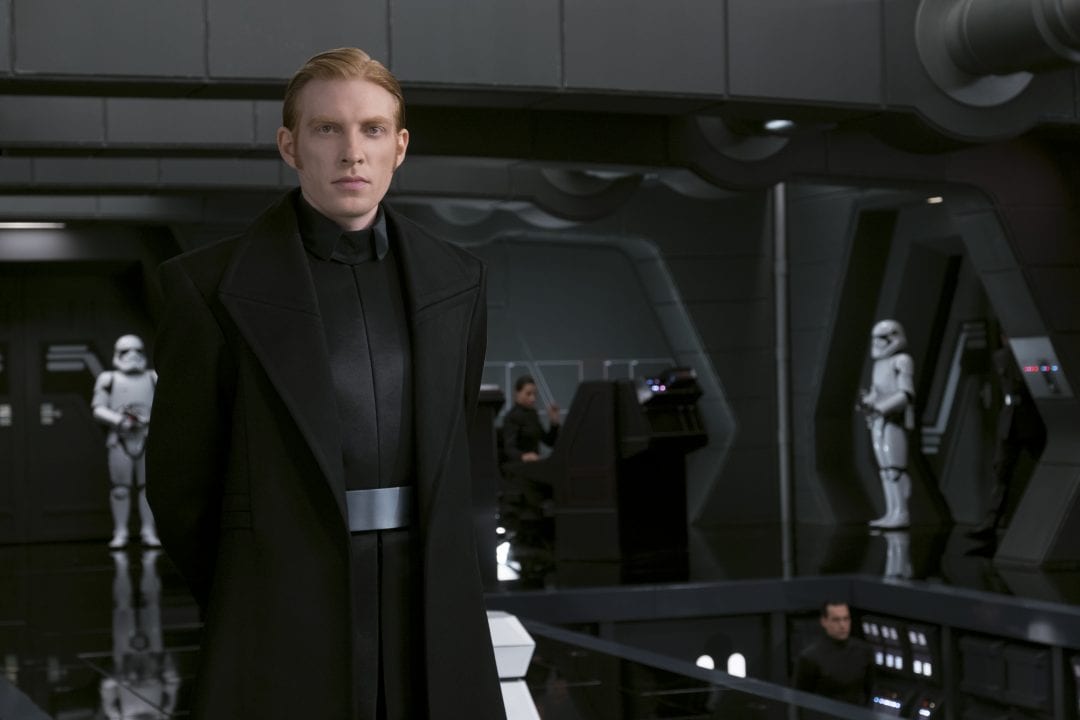 Tomorrow is the day!!! Star Wars day, that is! Star Wars: The Last Jedi is out in theaters tomorrow. So this week has been all about the interviews we conducted with Star Wars cast from the Global Press Event.

I’m excited about sharing today’s interview with Domhnall Gleeson AKA General Hux himself.

When he walked in the room and we greeted him with cheers and rounds of applause, this was his reaction:

“You know I’m not Cate Blanchett, right? [LAUGHTER]. I used to get called Cate all the time when I was nineteen cause I look like her… How you  all doing?”

I loved that! He was so fun to chat with. Check out our interview below. 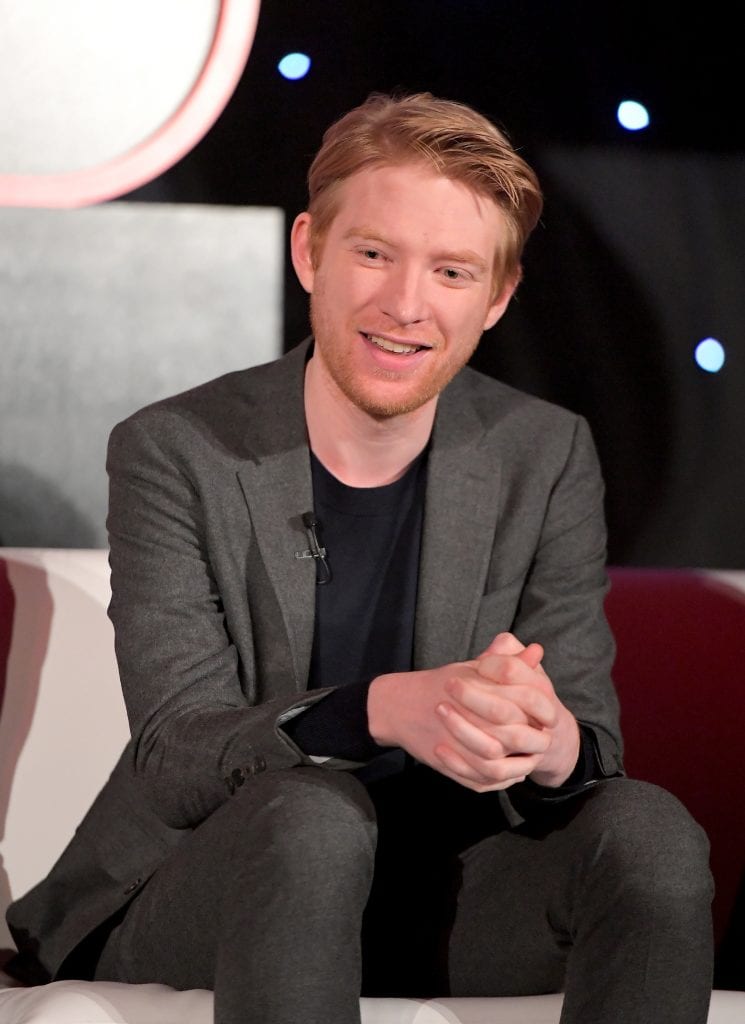 On why he didn’t screen the film with his fellow castmates the night before?

I decided I would rather see it with two thousand people who don’t know what’s going to happen. Just the feeling in the room…at the Force Awakens, that premier was insane. I was there with my dad and my friend Lawrence. The whoops and cheering and big gasps and everything. I didn’t want to miss out on that being my first experience with the film, so I’m waiting until whatever day it is next week.

Regarding Disney’s Star Tours ride: How Domnhall feels about it

I talked about our experience at Disneyland during this press trip. So we wanted to know what it was like to be a part of a ride that is at Disney?

Once he realized we were down the street from Disneyland, he responded: Oh, I’ll have to go, [LAUGHTER].  It’s cool. Like, being part of two different rides that literally millions of people will go on is kind of ridiculous. But, in a way, it’s no different than the films. So many people are going to see Star Wars that it’s a bit nuts. The whole thing is a little bit nuts. It’s good though! 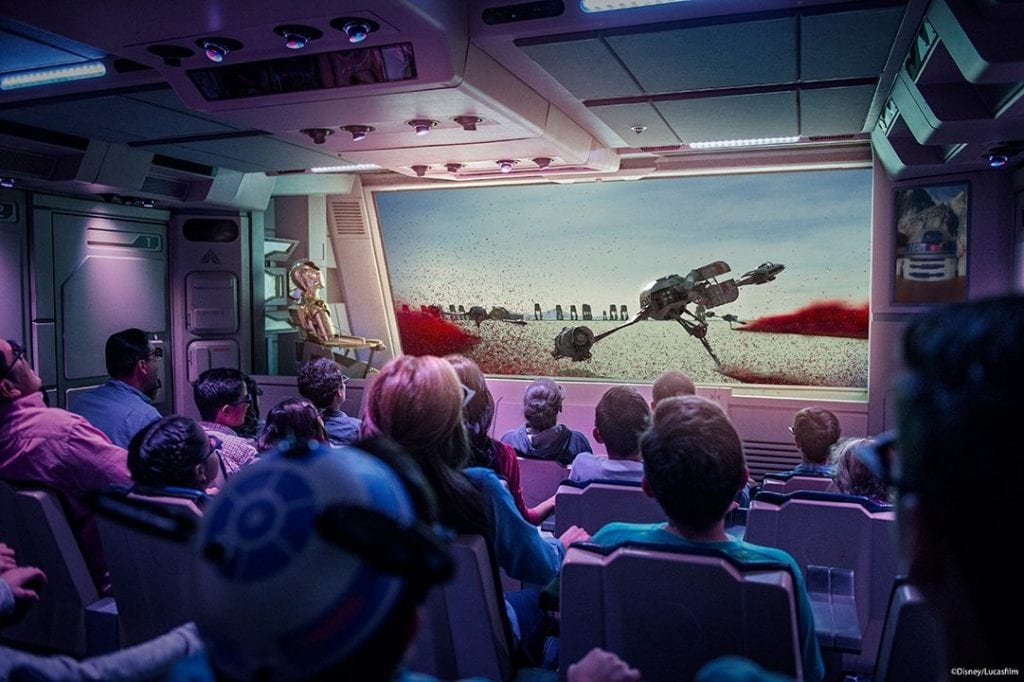 View of inside the Star Tours ride in Disneyland.

About filming Star Wars in Ireland where he’s from

I love it. And I love that the people who went there had an amazing time. I love that they got good weather. And that they were all the way up and down the west coast, and Ireland is my home. I think it’s the best place in the world, and I’m just happy for people to see it. It’s an intensely beautiful place, and they got to see it in intensely beautiful weather, which is ridiculous. That never happens [LAUGHTER].

So when they came back and they were all talking about what a good time they had in Ireland, even though I had nothing to do with that, I have to say I was pretty proud, yeah. 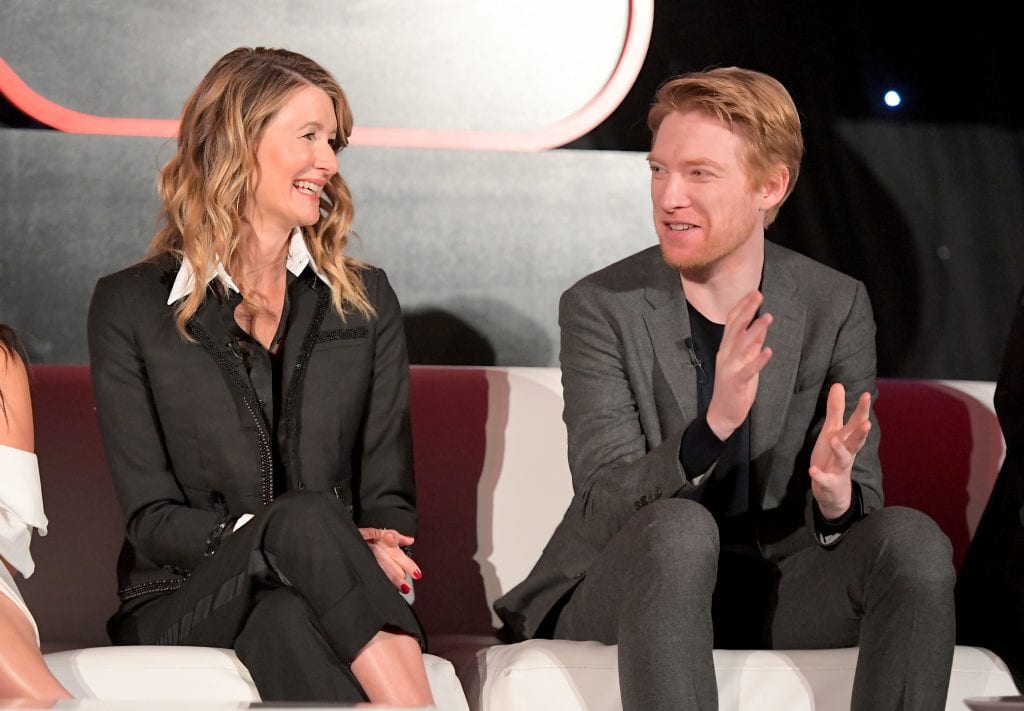 You can’t steal, but obviously, his place in things at the beginning of the film is like Peter Cushing’s kind of role. That’s in terms of the way the villains are set up. He would be fulfilling that role a little bit, just that very clipped English accent, I liked for that. But then you have to go to the real world to find you influences cause you can’t take your character notes from other characters. I think you want to base it on something that’s real.

So I understood where he stood in things, but no, the influences would have come from elsewhere. And the most interesting version of Hux, it turns out (which is not there from the very beginning) was the one that’s actually very dysfunctional with Kylo Ren and battling for his place in things. And for favor from Snoke.

Domhnall compares character arc from first to the second film

With the character arc in the first film, he goes from a very good place to a very bad place in terms of his standing in things. I think it’s pretty obvious that he wants his place on the throne. He wants to be in charge of Kylo Ren. And so that’s what he would like. But he’s in a really much worse place at the end of the first movie than he was at the beginning in terms of achieving that goal.

And that’s where we basically start the second movie. You’re just starting the character in a much worse place. A much more desperate place, much more uncomfortable place, and I think that’s a good place to put somebody like Hux.

Taking a step back from him and thinking objectively, you want Hux to suffer. That is what you want for somebody like that, who behaves like that, and who carries himself like that. And I liked creating somebody that that would end up being the feeling you would have for him. So we start with a place where we’re ready to see him suffer. 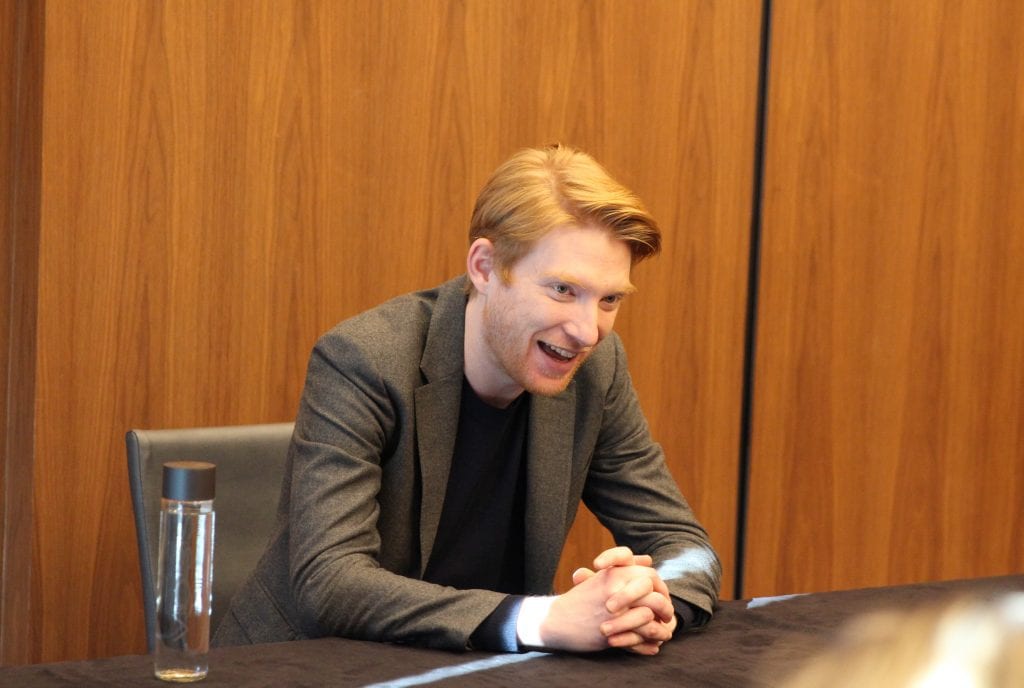 I think, even more than rage, I think there’s a desperation about him, which is very unbecoming. There’s a need at all times to make sure that everybody knows that he’s important; that they should do what he says, that he deserves his position in things. But he knows that he’s now as powerful as Ren, really when it comes to it. If it came to a fist fight, he’s dead within ten seconds. And Ren wouldn’t have to use his fist, he’d just force choke him or whatever.

So you just put yourself in a desperate place and then say, and now I’m pretending that I’m powerful, even though something in there is worried that you’re not. I think insecurity is where he is. And that’s where we tried to start him from. 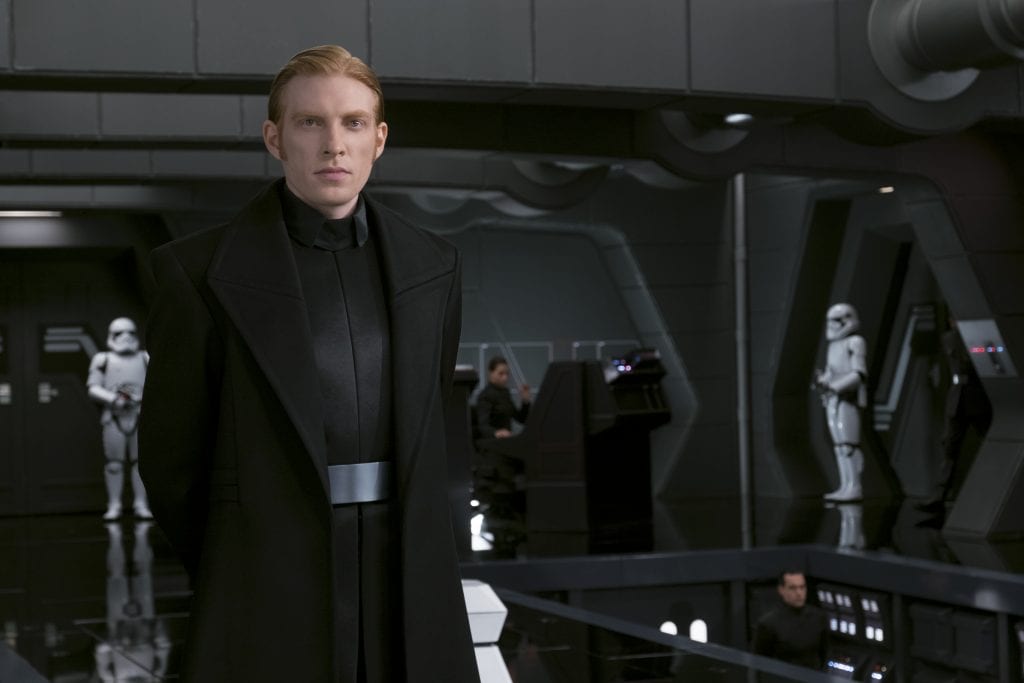 What it means to be a part of Star Wars

The question was asked if he ever had “geek out” or had “oh my gosh” moments. Here is what he had to say:

Oh my gosh? That’s so polite, [LAUGHTER]. I used different words. There are lots of moments like that because of the scale of things. Because of how much Star Wars means to people. Just the history of it. Harry Potter was a huge journey, and those films were over twelve/ten years, something like that, you know what I mean? This has been going on since forever.

There are so many things which are part of growing up, which are part of people’s childhoods. There’s just something that’s a position of privilege, so loads of moments like that. When you’re on set, other people have to come on set to show [Director] Rian a costume in person or talk to him about something.

So the days when you don’t know somebody’s gonna be in, and you’re kinda talking to Rian about something…then Mark Hamill just walks up in his Luke Skywalker gear, you’re like what the f- [LAUGHTER]. You’re… oh my gosh… [LAUGHTER]. 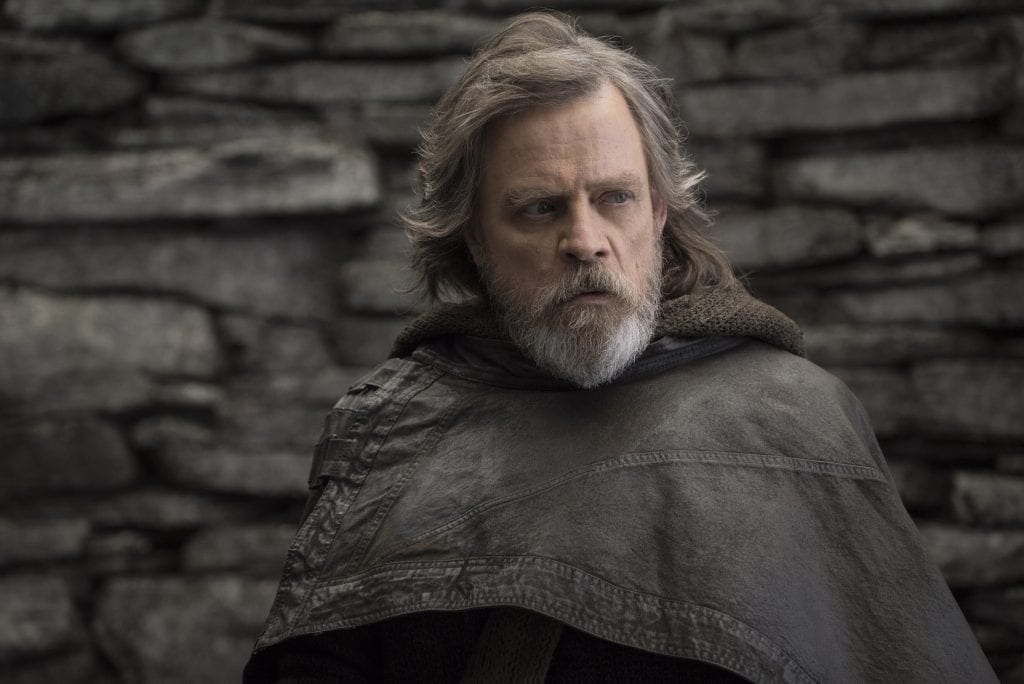 It’s weird, right? This is also another reason it was good for me not to watch the movie because I would definitely have spoiled it for all of you already. My mother has form in this regard. She is the worst person to give away the endings of movies, so I try and make sure I don’t put myself in that position. It’s odd. It’s really easy to say nothing. It’s really difficult to say a little but not too much. And that’s where we are existing in this week.

Because all the way up until now, we haven’t been allowed to say anything. And now, we are expected to say a little. And that’s much harder. I’m just worried I would give away the whole ending. [LAUGHTER]. So now I shut off. 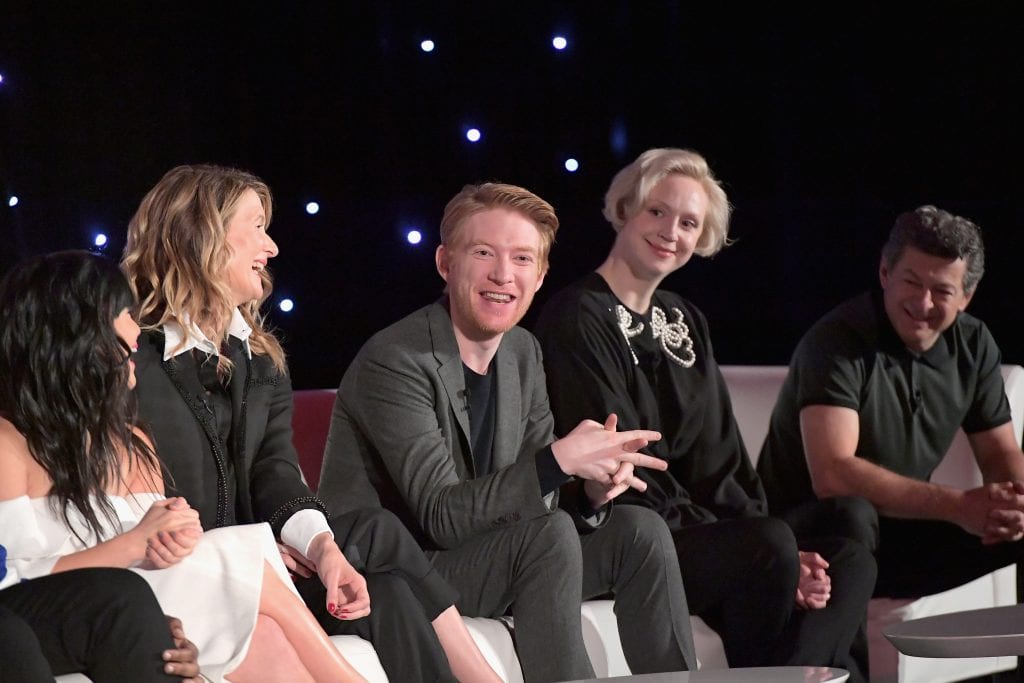 How does Star Wars compare to the times we’re living in currently?

Most pieces of great art reflect something about the times you live in, no matter when you live. I think that there’s never a lack of bad intention in the world.

And there are people only out for their own interest and the interest of the few. That’s been around forever and will always be around. That’s not gonna disappear. So I think you can just compare it to any time. But the brilliance of Star Wars is that when you watch it, you can be entertained by the dark side, whereas in real life, that isn’t entertaining, that’s terrifying. Different.

What’s next for General Hux?

And then a bit of time off. I’ve done a lot of work in the last couple years. And I’ll go back to Dublin and chill out and just try to be around my family for Christmas. Yeah, that’s the notion. That sounds like the dark side, right? [LAUGHTER] 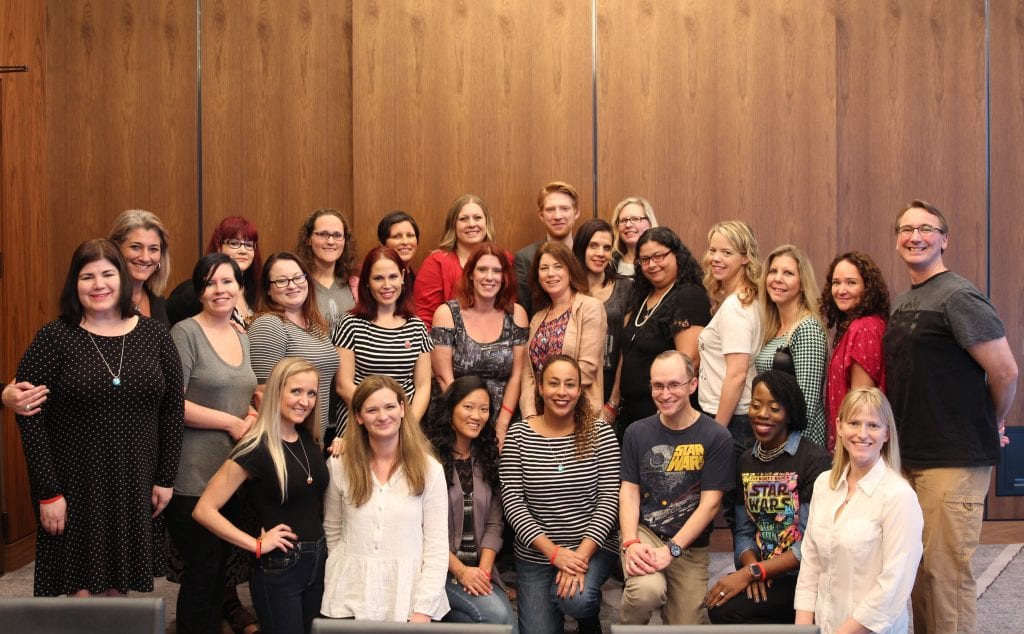 I loved chatting it up with General Hux. He definitely brought a bit of comedy relief even on the dark side in The Last Jedi. LOL

STAR WARS: THE LAST JEDI opens in theatres everywhere TOMORROW, December 15th! Have you purchased your tickets yet? 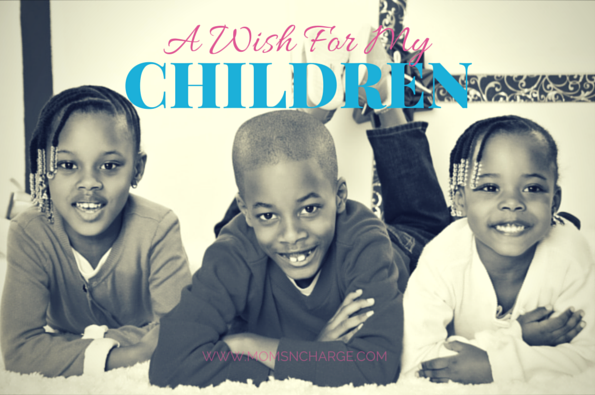 Kids Dreaming Big – A Wish For My Children #APMyWish 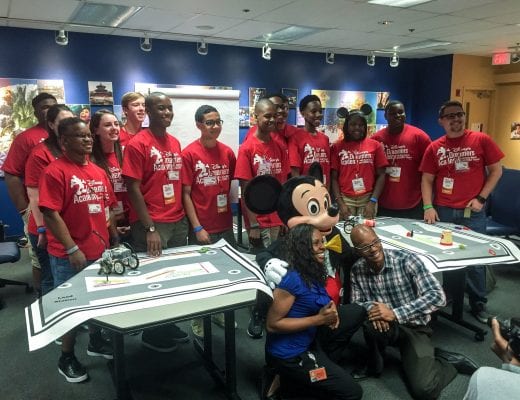 Engineering and Walt Disney World: They go Together #ddaDisney