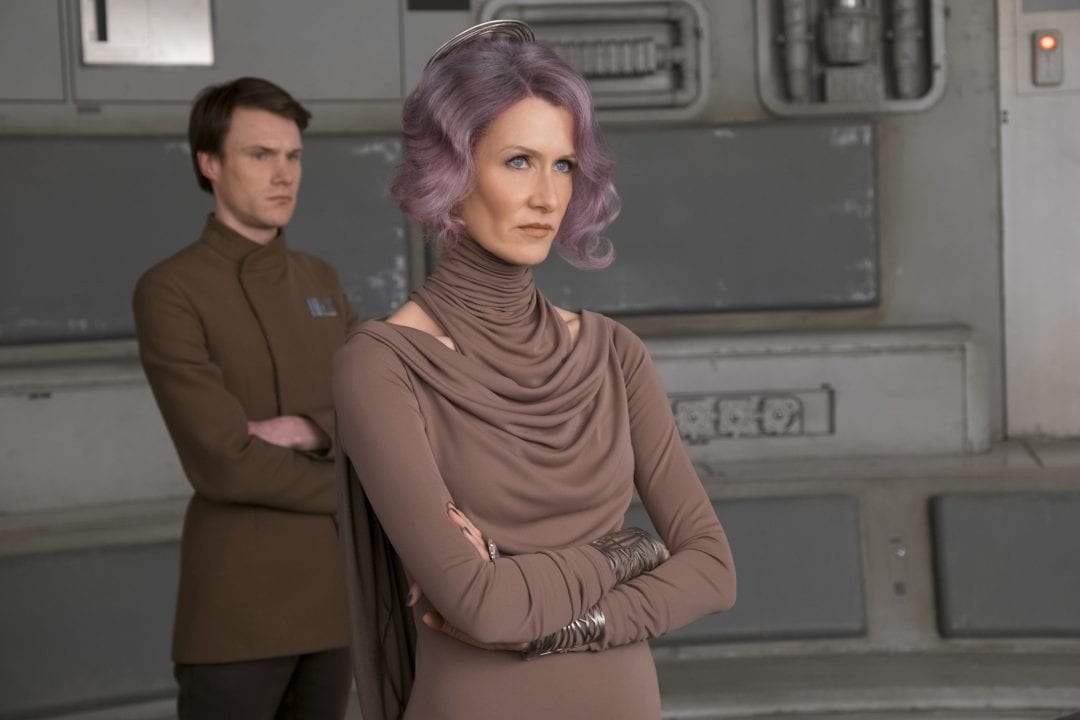 It’s Star Wars week y’all!!! Finally, the premier we’ve all been waiting for. Star Wars: The Last Jedi opens in theaters everywhere this Friday 12/15! And every day this week I’m giving you the inside scoop with exclusive interviews we had with cast from the film.

Today is all about Laura Dern AKA the new Sheriff in town, newcomer Vice Admiral Holdo.

In case you missed it, I spent some time in LA last week with 24 other amazing bloggers to cover the global press event for the film (more details on that later this week). 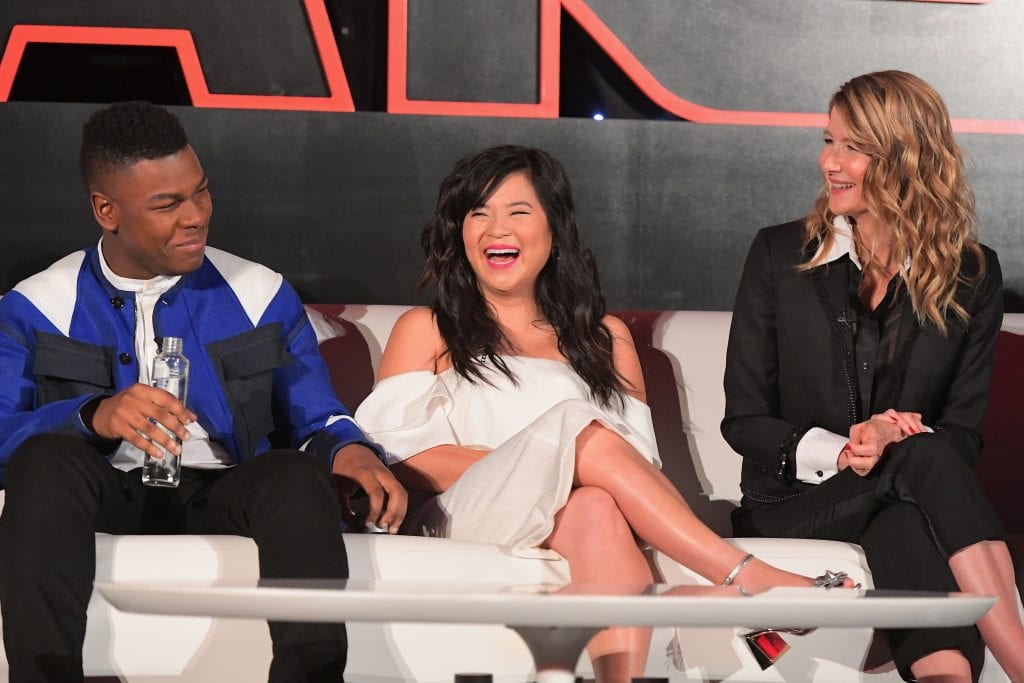 We greeted Laura with open arms and cheers when she walked in the room! I just LOVED her genuine smile and energy. 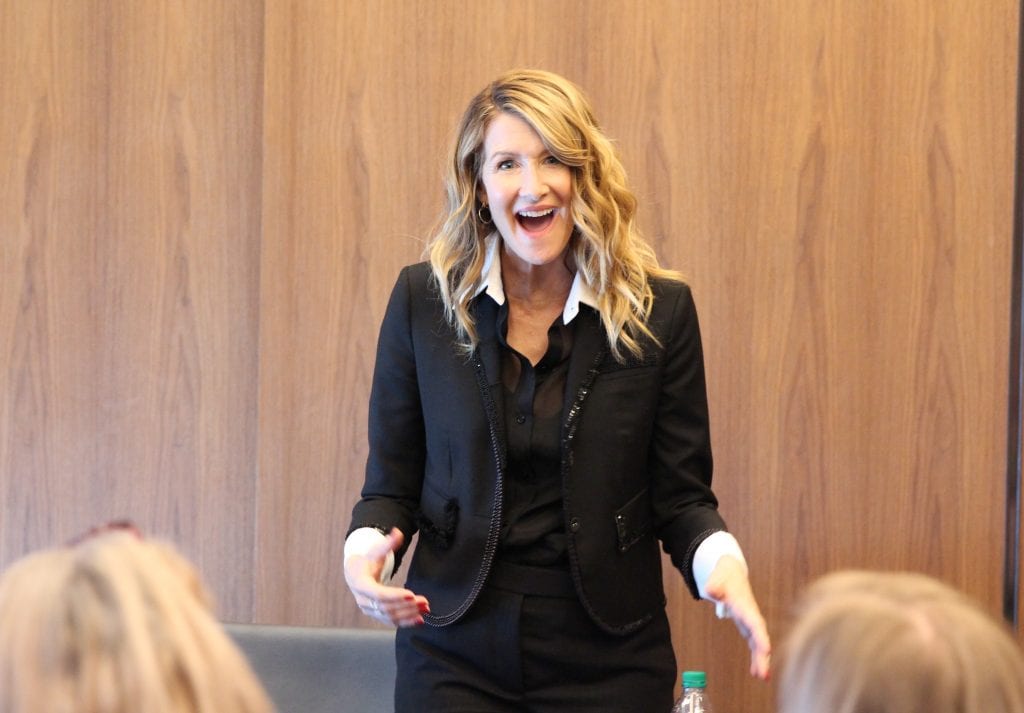 All about Vice Admiral Amilyn (but not really)

When asked what she could tell us about Vice Admiral, and her answer?

“She has purple hair! There’s a new boss in town. I arrived in the Resistance and I am a Vice Admiral. That’s pretty much all I can tell you.”

Laura shared with us how amazing it was to be inside Rian Johnson’s (Director) head. She said, “I had the privilege of collaborating on who the character is and how to present this powerful woman.” And the longing of Rian Johnson and Kathy Kennedy and all of the Producers to allow a “powerful, female character to be feminine, as opposed, to Oh, she’s a strong Female.  Let’s put her in guys’ clothes.”

I feel excited to join this amazing legacy of strong females in space, starting with our magnificent icon of Princess Leia. 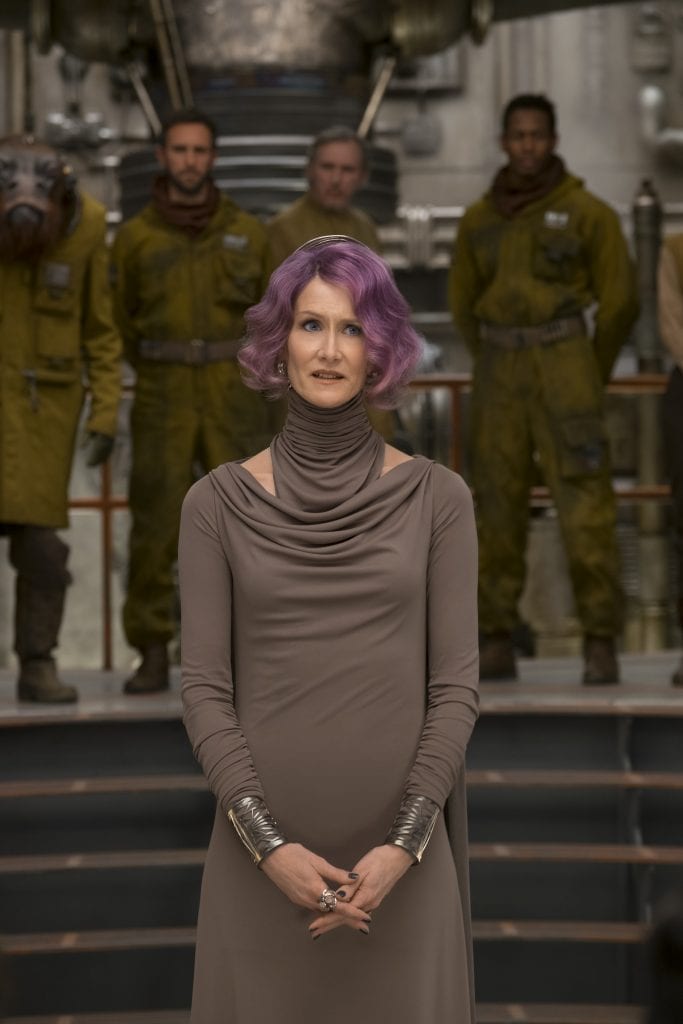 She shared with us that she received a call from Rian Johnson (film Director) asking her to have lunch and talk about something. He started describing what he was looking for in a character and wanted for her to help him with this. It wasn’t until the end of the lunch that he told her it was for Star Wars.

Oh my gosh that’s amazing having been a huge fan as a child!

He started describing a world to me that was about the complexity of being a human being and the battle between light and dark, and not knowing which would win; it was the struggle of a family and the hero’s journey.

When Rian described this complicated female character in such a beautiful way, it also spoke to something that Rebel Film Makers have asked of their collaborators and in my case, as an Actor of me.

And then to realize, My God, that’s what George Lucas invented.  And that’s why I think this stands the test of time in such a profound way is it’s not a franchise, it’s a legacy of the deepest storytelling we have. 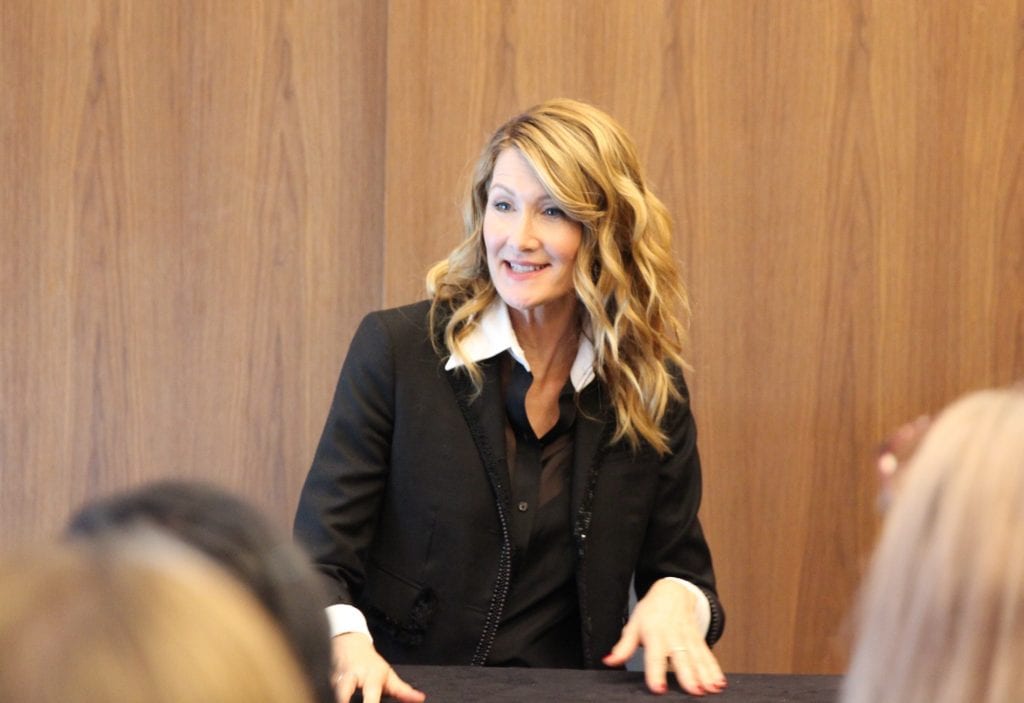 My parents are such fans. They love hardcore independent films, there’s no film that doesn’t have the potential to be the greatest thing ever. They love cinema.

I saw the first Star Wars.  I was probably 6. It was the first time I stood in line for a movie at the Cinerama Dome and it was blocks long.  And it was profound for me.  And the genre seemingly would not have been something I was interested in but the spoiled part is I have been raised by Actors.

So she had been introduced to the world where every movie is magical.

There’s no film that doesn’t hold the potential of being the greatest thing ever whether it’s Animation, Independent Film, something on this scale because they love character and they love cinema. 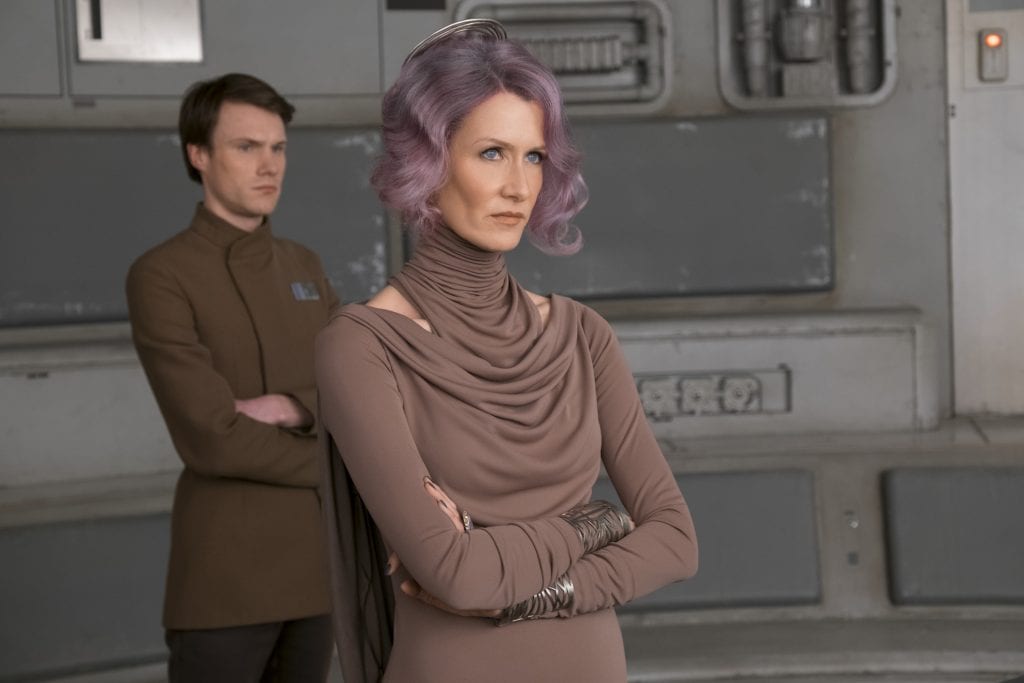 About the love of the Droid and R2D2 influence

But in this specific case, my Dad only, I think a few years before, had done a Douglas Trumble Film called “Silent Running.” I’m told it was a great influence on George Lucas in that it was my Dad alone in space with 3 Droids named Huey, Dewey, and Louie. I became obsessed with these Droids and those Droids I’m told were a great influence toward R2D2. I had a figurine of this Droid and remember that idea of being in space with these characters who are your partners.

And then suddenly Star Wars opened up this kind of storytelling in this massive way so it felt personal, as Star Wars does to all of us.

Speaking of Droids, I got up close and personal with BB-8 and BB-9E last week also. 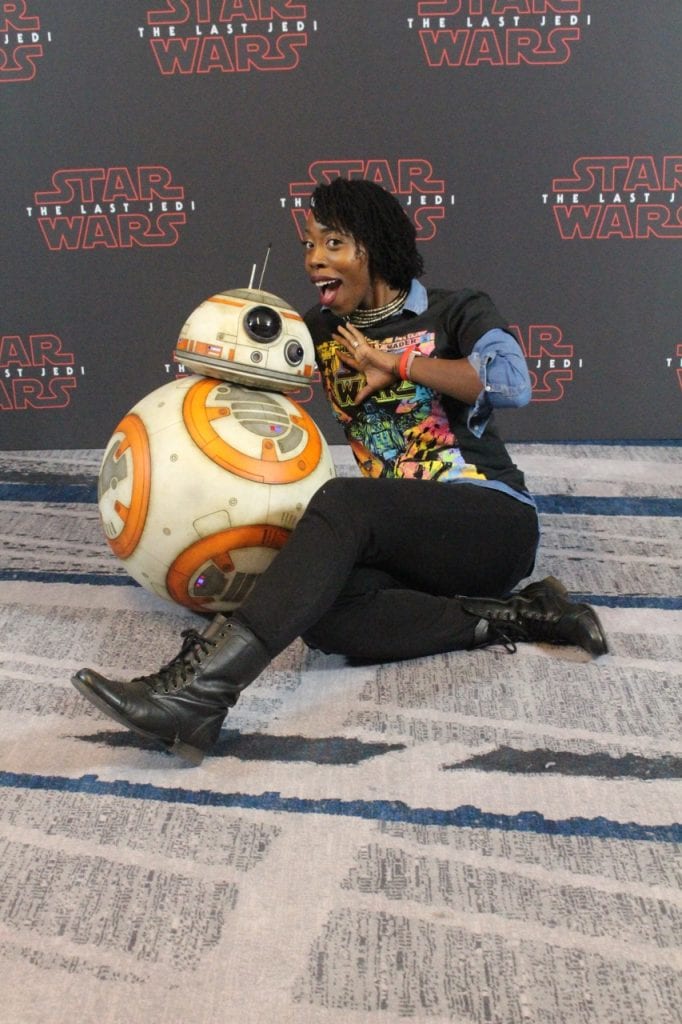 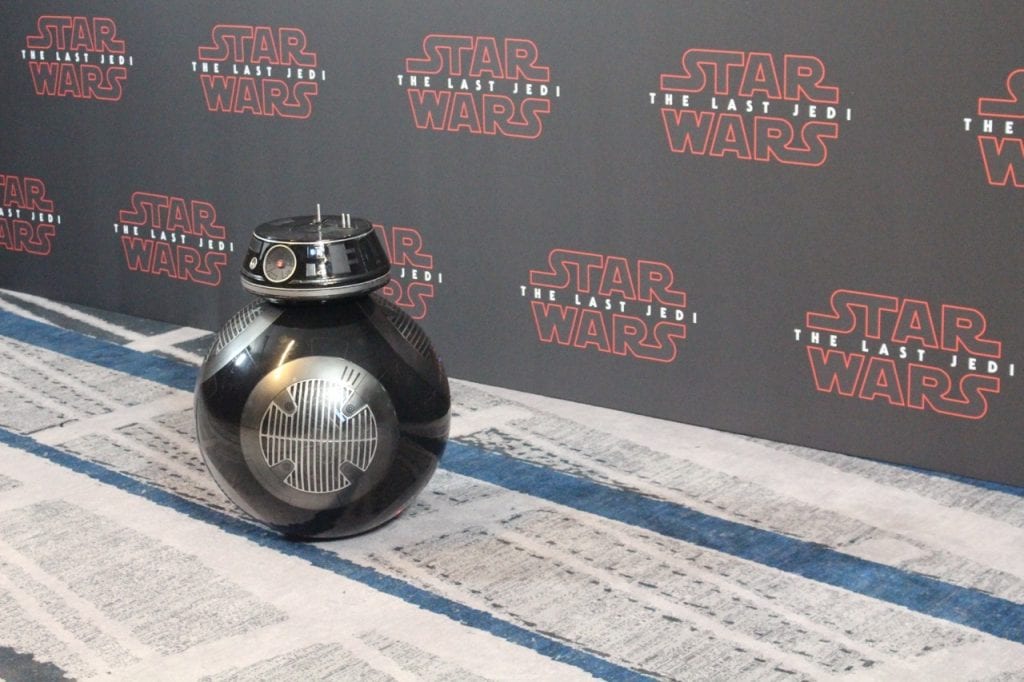 What strong female characters mean to little girls around the world

The question was asked to Laura about how she thought these strong female characters would empower little girls, and what it would bring to the Star Wars franchise as a whole?

It’s just incredible.  That’s so exciting.  I know what Leia was for me as I know she was for all of you.  And it was again, not just her strength in some superheroic way but in the deeply human way that she, Carrie so incredibly embodied was this fearless irreverent sassy bold, vulnerable female.  And all things to be true and powerful and kick butt and all of those things were in one character.

She went on to share that we don’t see that often and that it meant the world to her and now her daughter and her friends to have this in Rey and soon other characters in this film.

About being seen in Jurassic Park again? Well, she neither confirmed nor denied, but did agree that it was a great suggestion and great idea. wink 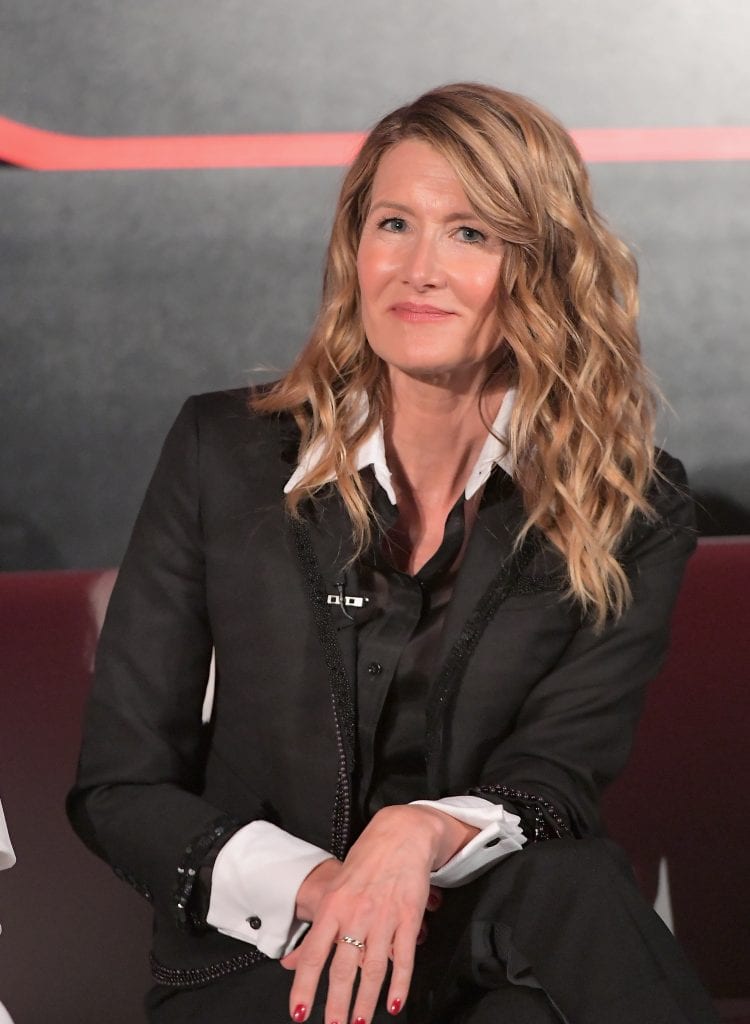 How Laura Dern prepared for the role of Vice Admiral Hodal

She shared that speaking to all of the actors was a huge help. It was awesome to hear about their true shared experience of needing to have “the moment”. You know, that fan freak out moment. Yes! They have those moments too (I mean, we are talking about Star Wars).

She shared that once they have their moment, they can let it disappear so they are just telling the story of these characters.

I loved the special moment she shared with us when Rian came to her one morning on set and shared that someone was a fan and wanted to say hello.  This was right before starting the day as she was standing and making some tea.

When she turned around, Chewbacca was there and she cried as she embraced him. How sweet is that? I teared up listening to her tell the story. I can only imagine how surreal it felt. 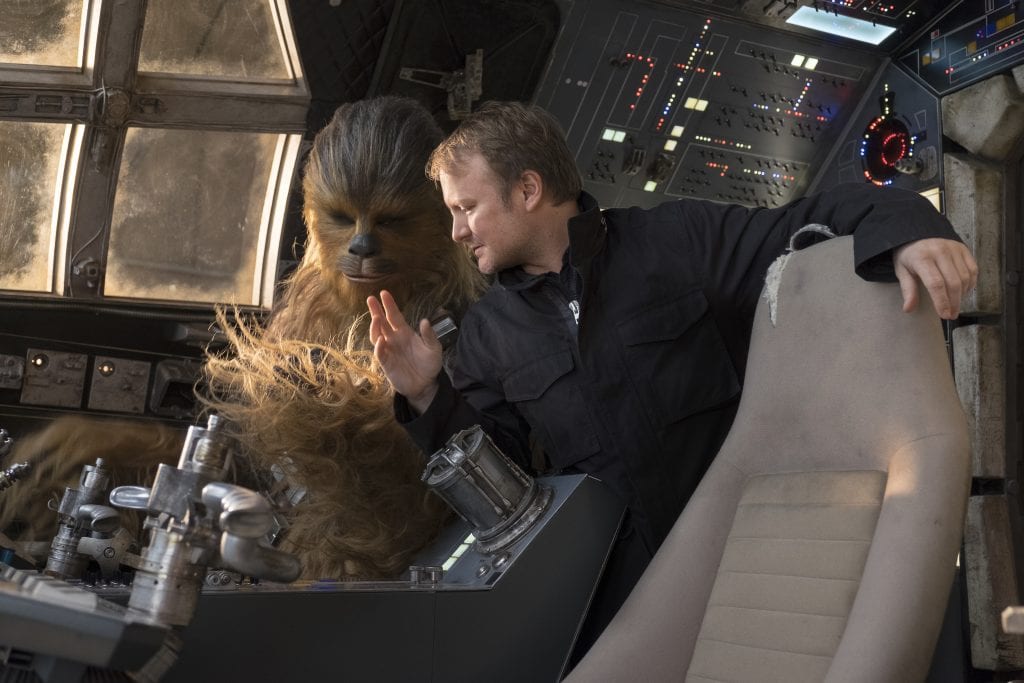 It was so moving to me, in that moment and then being on set and seeing R2D2 and the rest of the characters we have all grown to know and love.

And then I had to get over it and go to work. But it’s an incredible opportunity and experience that I’m so happy to get to be part of it. 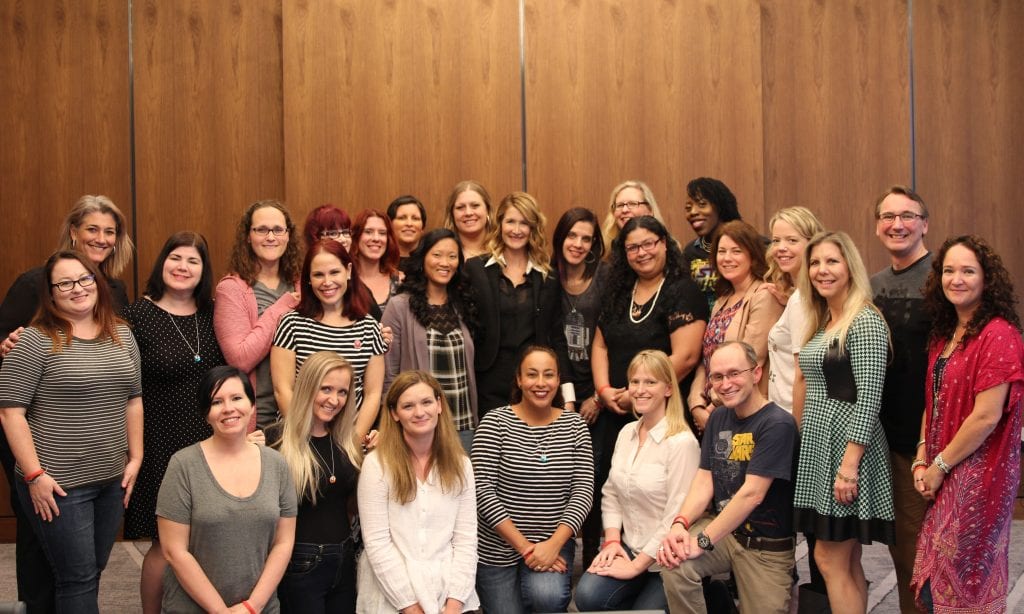 STAR WARS: THE LAST JEDI opens in theatres everywhere THIS Friday, December 15th! Have you purchased your tickets yet? 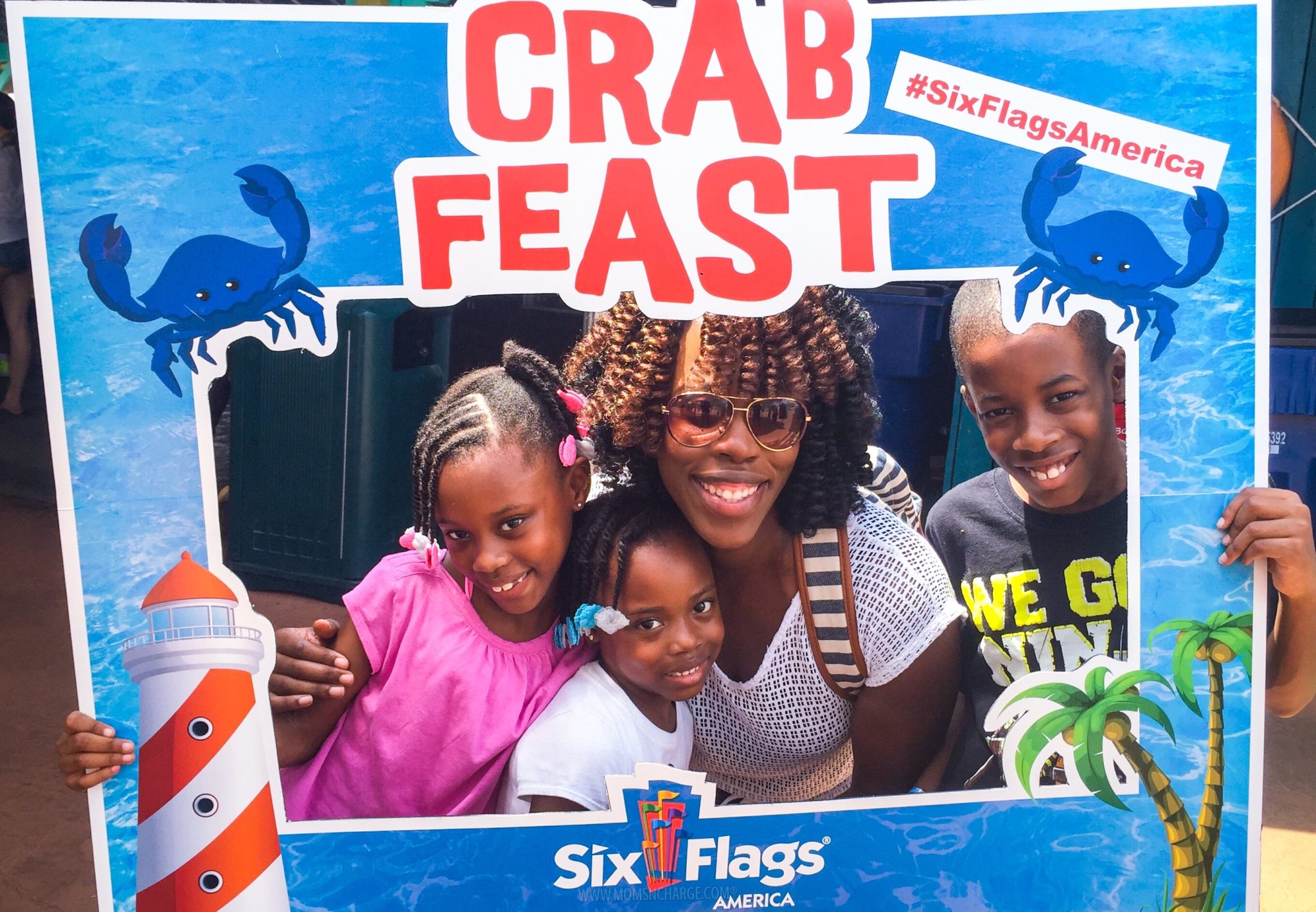 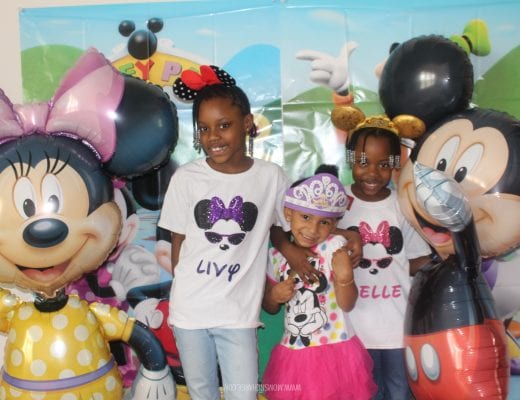