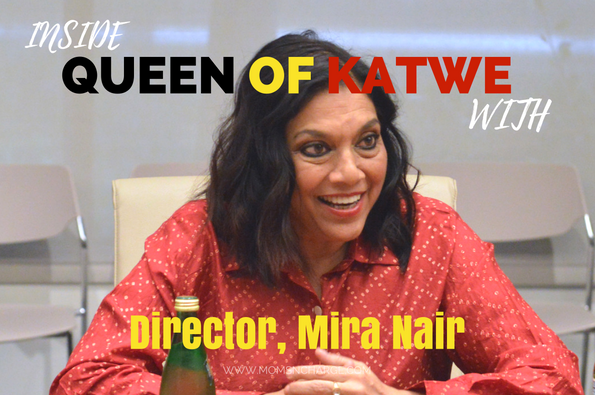 Today I’m sharing another interview that was conducted last week during our Queen of Katwe event. Not sure what I’m talking about? How is that possible? No worries, I’ve got you covered. Basically, I’m taking you all the way behind-the-scenes of Queen of Katwe and the stars that made this film come to life. 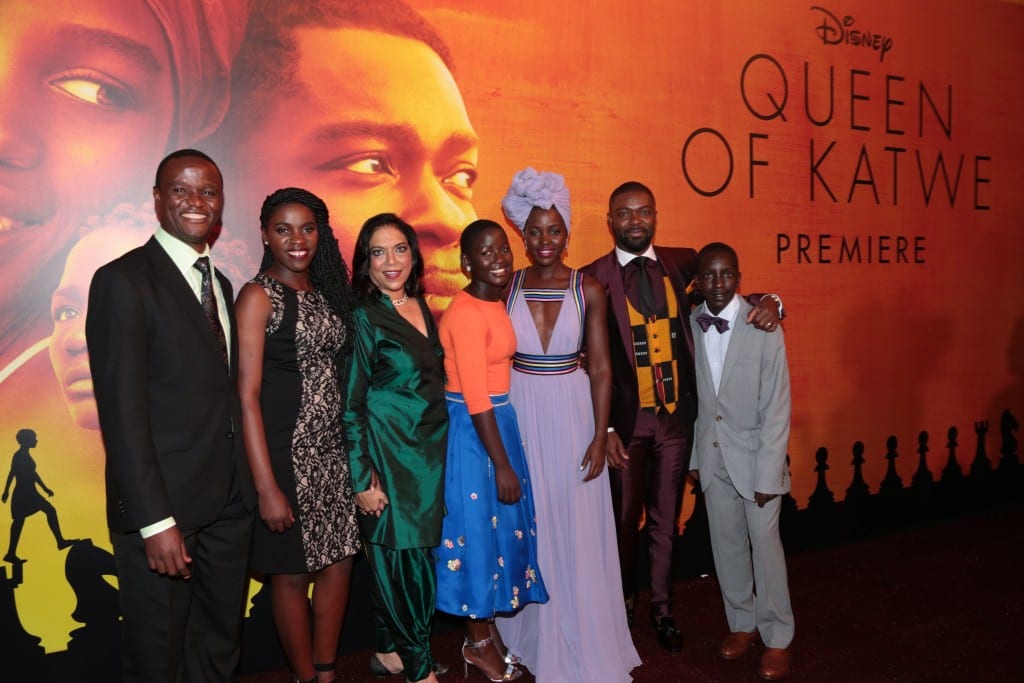 If you need to get caught up (which, you really should), here is what you missed:

Last week I spilled the tea on my entire (or most of it anyway) red carpet experience, and dancing with Lupita (well, sorta): check out that post here.

Fast forward to Monday where I shared my in-depth review of Queen of Katwe, and 11 life lessons you’ll walk away with: check out that post here.

Then on Tuesday, I shared one of my favorite interviews: it was with Lupita Nyong’o, Madina Nalwanga and Martin Kabanza (it’s more than you think): you can check out that post here.

And I have been eager to share this one with Director, Mira Nair who is an accomplished film Director, Producer, and Writer. If you don’t know her name, you should. I guarantee you’ve seen her work. Does Monsoon Wedding or Mississippi Masala ring a bell?

Before we get into it, I think it’s important that you see the trailer for the film if you haven’t already. So here it is:

Mira Nair shared that she had been living in Kampala for 27 years (ever since she made Mississippi Masala there in 1989) and started my life there — fell in love and had a son. She later created a film school called Maisha.  The slogan of Maisha: If we don’t tell our own stories, no one else will. 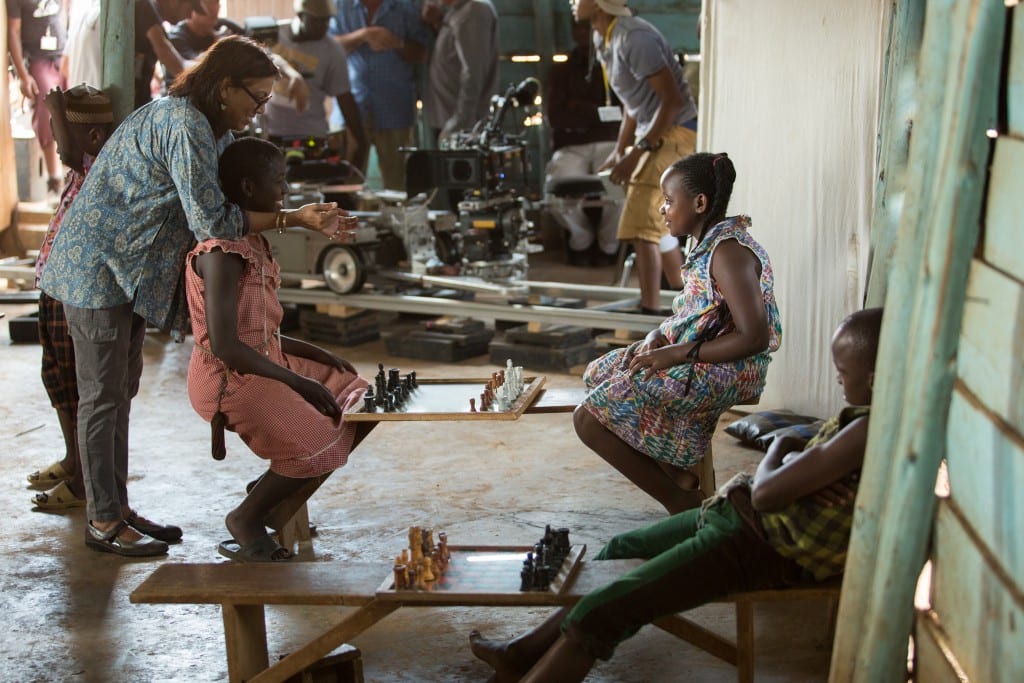 Director Mira Nair on the set of Disney’s QUEEN OF KATWE with Madina Nalwanga. The film is based on a true story of a young girl from the streets of rural Uganda whose world changes when she is introduced to the game of chess, the film also star Oscar (TM) winner Lupita Nyong’o.

She created the school because “…we have to make the dignity and the joy of everyday life in our street in Kampala, anywhere.  Be specific.  Be local.  Be truthful.  And be excellent.”  Today, they have 680 alumni students and several directors that have been created from East Africa.

The irony is that the story of Phiona Mutesi took place about 15 minutes from her home and she did not know the story. She first found out about the story when Tendo Nagenda, EVP of Production for Disney, brought the story to her attention. And as they say…the rest is history.

You can tell that Mira Nair really wanted to make sure this film was as authentic as it could be. While Phiona’s mom, Harriet tries to discourage her from dreaming so she will not be disappointed, “Phiona proves to her mother quietly and steadily that it is possible — with a teacher like this, with a community like this, with a street like this, with a family like this — to achieve what you could dream for.” 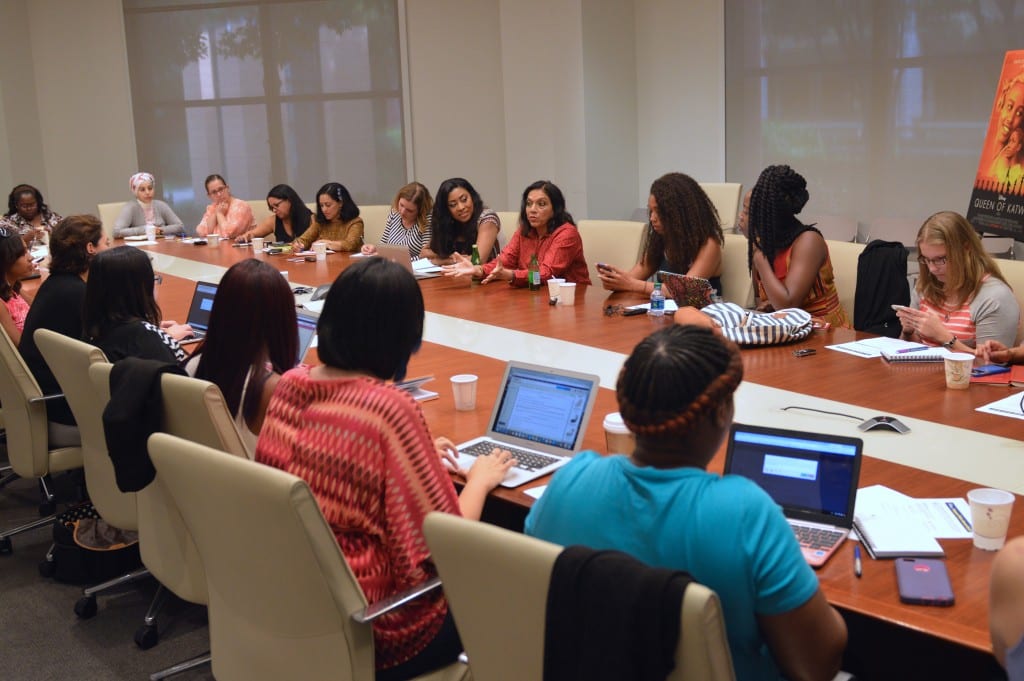 701. That is the number of auditions they saw from girls all over Uganda (Kampala, Katwe, Kibuli) as well as England, & Kenya, all vying for the role of Phiona Mutesi. Madina Nalwanga was number 701. In fact, Mira shared that she was not overly excited when the Casting Director (Dinaz Stafford) came to her to tell her about this new girl they had found. After all, they were 700 girls in, and she hadn’t yet fallen in love with any of the first 700. 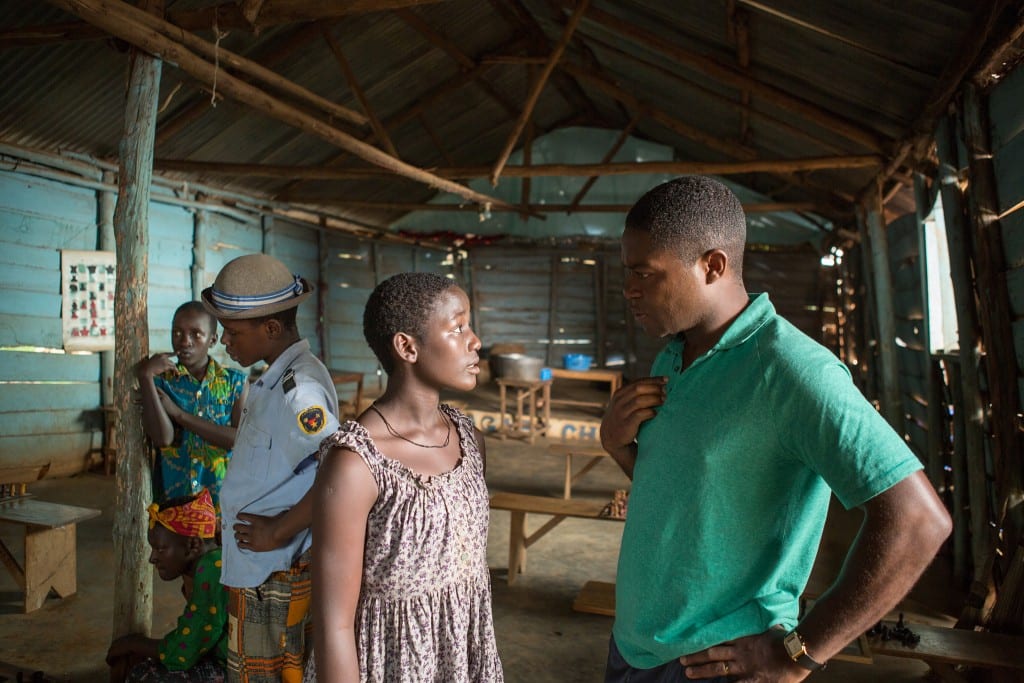 David Oyelowo is Robert Katende and Madina Nalwanga is Phiona Mutesi in in Disney’s QUEEN OF KATWE, based on a true story of a young girl from the streets of rural Uganda whose world rapidly changes when she is introduced to the game of chess. Oscar (TM) winner Lupita Nyong’o also stars in the film, directed by Mira Nair.

It was tough because this was the role that was going to set the tone for the entire film. And set the tone Madina did with her exemplary performance.

As soon as Mira saw her in person, she knew almost immediately she was the one. In Mira’s words, “She owned it. She was extraordinary.” 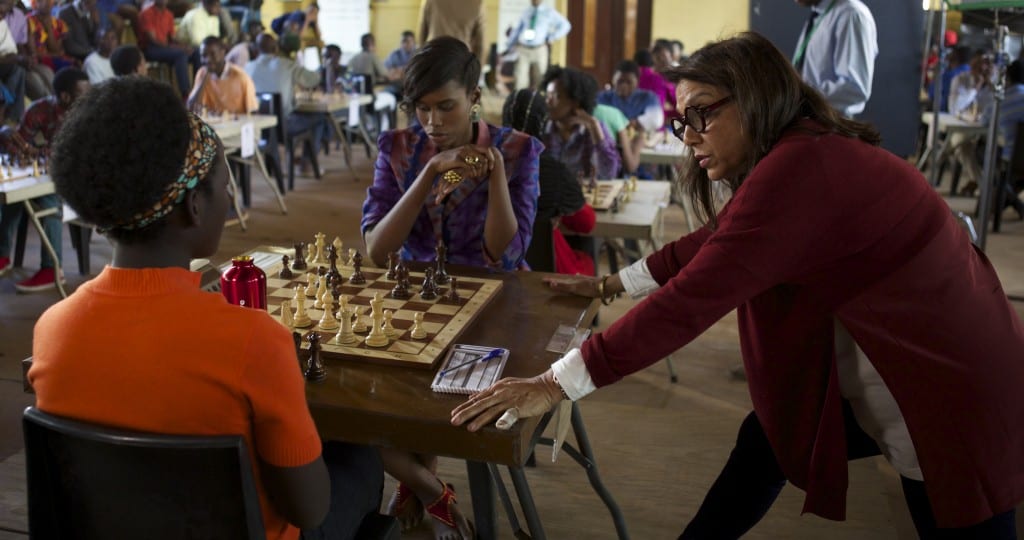 Director Mira Nair on the set of Disney’s QUEEN OF KATWE with Madina Nalwanga. The film is based on a true story of a young girl from the streets of rural Uganda whose world changes when she is introduced to the game of chess, the film also star Oscar (TM) winner Lupita Nyong’o.

Harriet’s story and character is one of power, strength, and determination. When Mira saw the trajectory of her actual struggle — the homelessness and her fierceness to keep her family together against absolutely every odd there was — it was so deeply moving. Harriet was full of courage and full of pragmatism.  “She was not a defeated woman by any means.”  Of course, to have a house at the end of it, made possible by her daughter, Phiona’s earnings was more than icing on the cake. 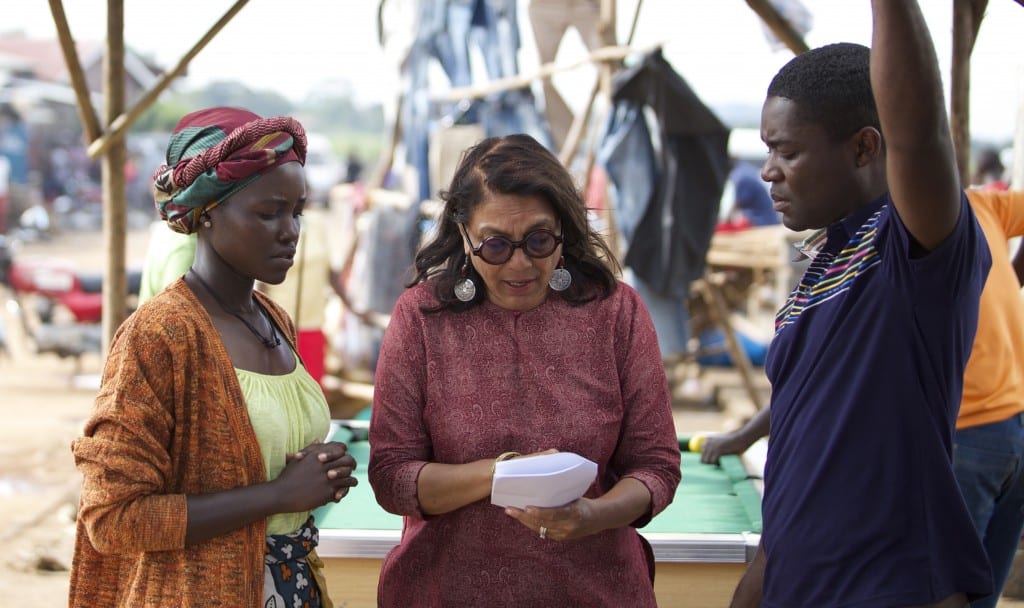 Director Mira Nair on the set of Disney’s QUEEN OF KATWE iwith David Oyelowo and Lupita Nyong’o. The vibrant true story of a young girl from the streets of rural Uganda whose world changes when she is introduced to the game of chess, the film also stars newcomer Madina Nalwanga.

Mira shared with us an important lesson she really wanted to convey — you cannot do it alone. “You have to have the fire in you, but it takes a village.  It takes a teacher to see your talent.  It takes a mother to shepherd you, whether it is a right shepherding or not, whether she understands if it is or isn’t a gambling game.”

On how the filming of this movie is impacting the people of Katwe, Uganda…

From the beginning, Mira shares her passion because it is her home.  That is where she lives and was not going to run away.  She explained all of the different things they have been doing since the filming of Queen of Katwe took place. 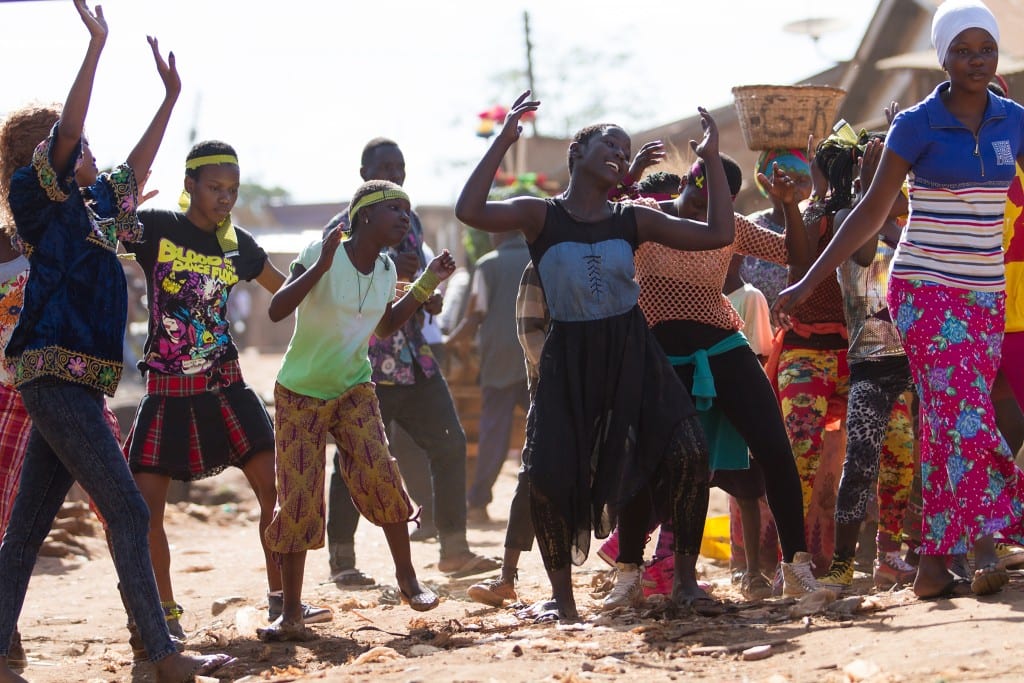 “One thing is we ran a green set. It’s an ecological set, which is unheard of there because plastic is so awful.  We turned everything into a recycled sort of heaven.  We also worked with the community of Katwe.”  They called it the Legacy Project, which is all shot in Katwe and the real places so they asked the community directly what they needed.

The elders of the community decided that public toilets were the big thing.  So they now have a project with Disney to create a whole series of public toilets in Katwe, which is just a small example.  They also recently purchased land and a building in Katwe in order to permanently house the Chess Academy. In addition, they also now have an educational fund for all of the pioneers in the film (for University). 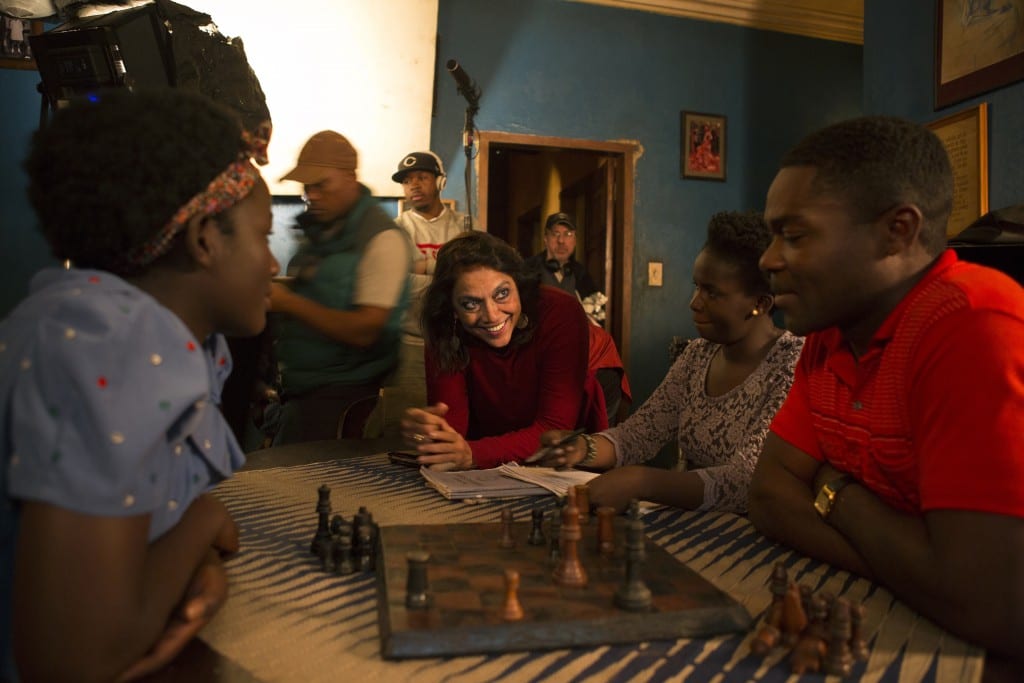 Director Mira Nair on the set of Disney’s QUEEN OF KATWE iwith David Oyelowo,Madina Nalwanga and Esther Lutaaya. The vibrant true story of a young girl from the streets of rural Uganda whose world changes when she is introduced to the game of chess, the film also stars Oscar (TM) winner Lupita Nyong’o.

Mira explains, “That’s a very complicated and very excellent endeavor, because just like in the film, education is the cornerstone.  And in Kampala, it’s a big emphasis.  People knock on your door every day for school fees because you must go to school.  So education of our kids is vital.”

Finally, Director Mira Nair shares with us that the Maisha Film School, which has now become a community interdisciplinary school for the community, is building the last phase of the physical school (hopefully with Disney’s help). This school will help create an open-air community theater and audiovisual library, both things not there but needed.

There no libraries.  There are no books.  “It is impossible for us to have done this thing and made this film and not care about what happens in the future because the whole film is as much about the present, as it is about the future of our kids.” 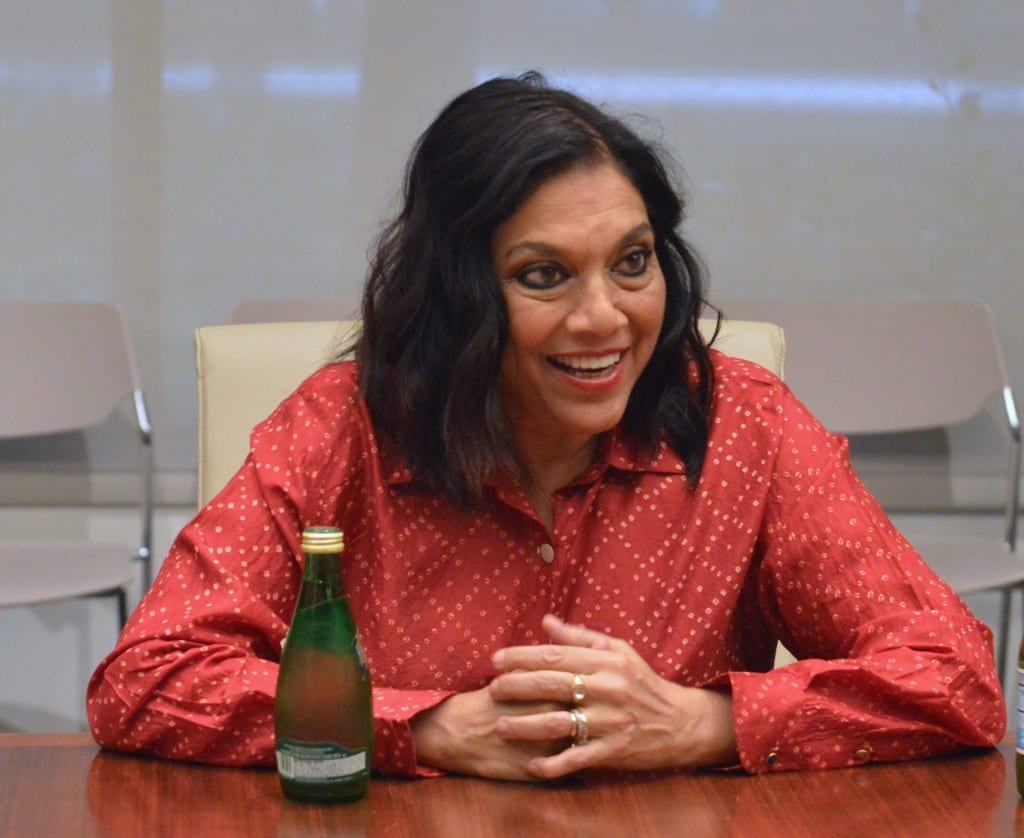 We ended our interview with small exchanges of congrats and accolades to Mira Nair, and of course, a group photo. I just want to point out that I’m wearing complete flats in the photo below LOL 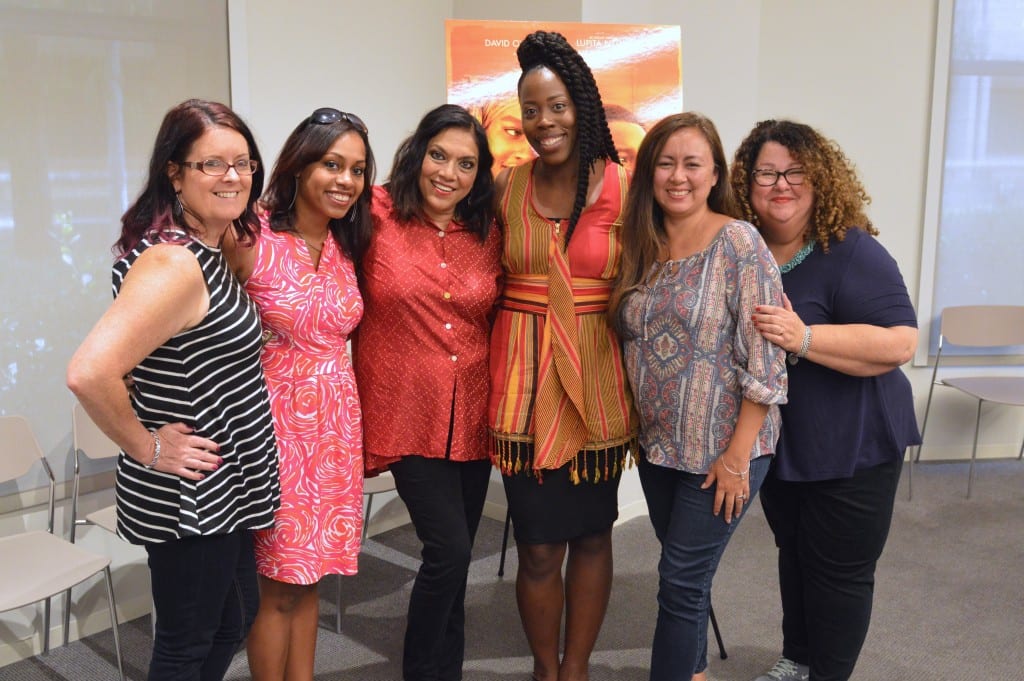 All smiles with Director Mira Nair (in this photo I’m wearing a top made by my mom, using a traditional kikoyi cloth of Uganda – which she immediately recognized and we had a small sidebar conversation about) Photo credit: Carol Jones / AllMommyWants.com 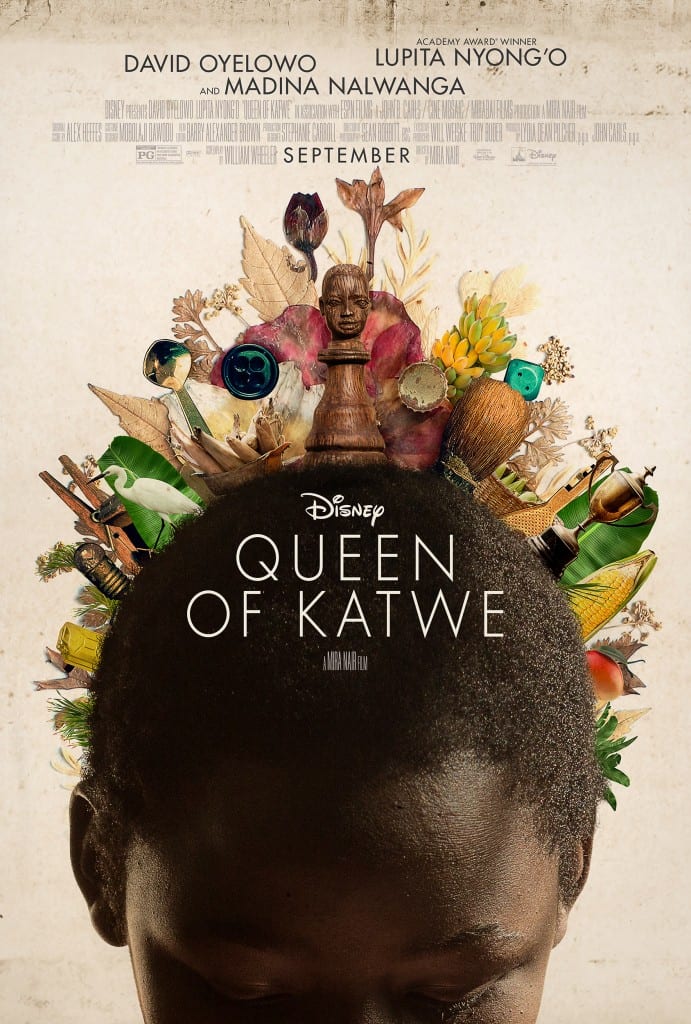 ! And be sure to join in the conversation using #QueenOfKatweEvent. 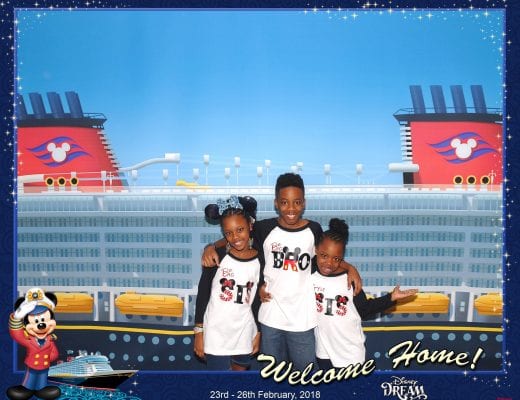 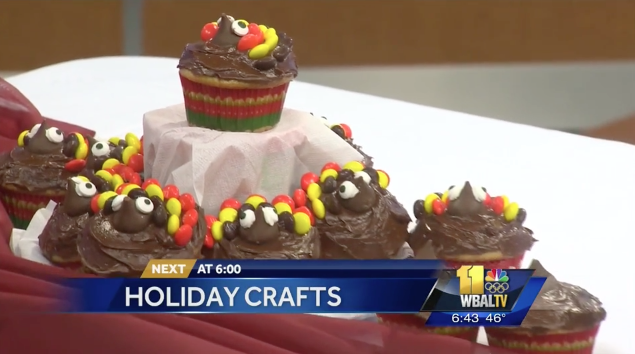 3 Ways to Make Thanksgiving Memorable and Meaningful for Kids 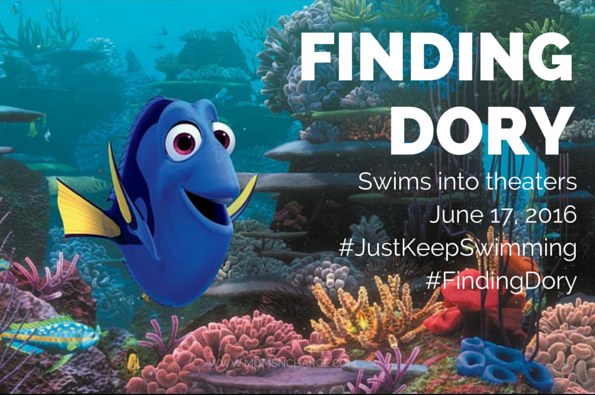