Did you get a chance to see Disney Pixar’s Coco while it was out in theaters? If not, don’t worry. Pixar’s Coco is now available on digital, Blu-ray and DVD starting today!

My family and I got to watch it in theaters and we all loved it. From the story to the music to the rich culture and bright colors, it truly was fantastic. As I mentioned previously, while in LA for the Black Panther Event, we got a chance to interview Anthony Gonzalez, the voice of Miguel.

In the interview, he shared why this film was so important to him. He also shared his own personal experiences and how closely connected he felt to Miguel. You can read the full interview with Anthony Gonzalez here. 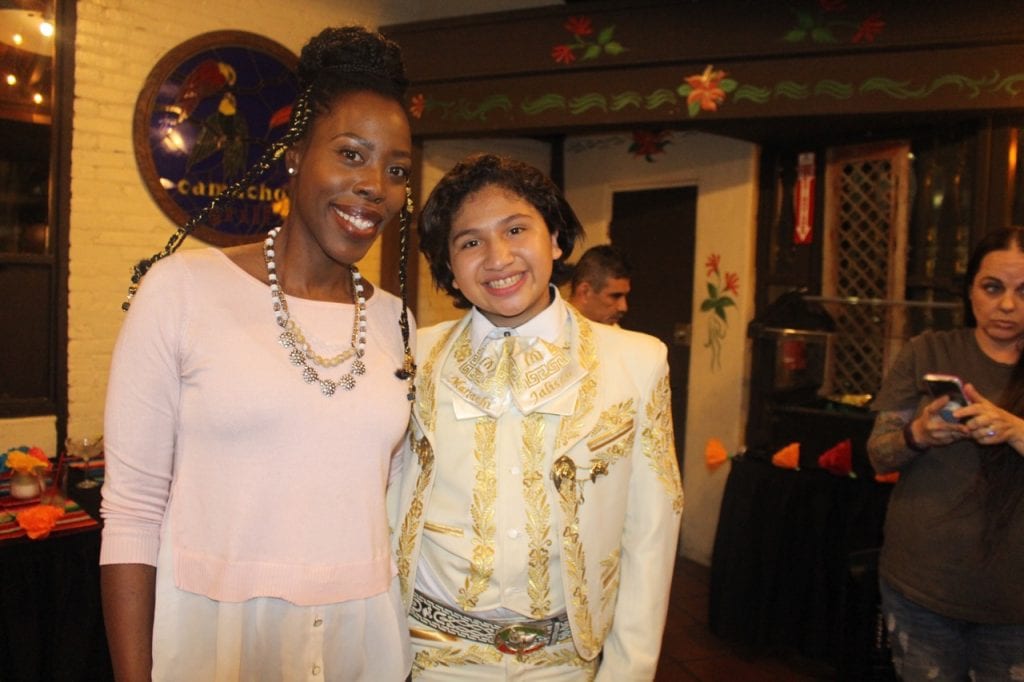 Such a bright young man. I can’t wait to see where his gifts take him!

‘Coco’ celebrates family and the art of being remembered. This film is about a 12-year-old boy who has big dreams. Director, Lee Unkrich says, “It’s about a hardworking family with great traditions and a lot of love. But what’s so cool about ‘Coco’ is that the boy could be my son. That family could live next door. The sweet, bossy grandmother who insists on one more bite might be your grandma. There’s something familiar to us all in this story. That’s what makes it so special.”

Día de Muertos (The Day of the Dead) is a Mexican heritage tradition with roots in indigenous culture.

6 Reasons to Grab Your Copy of Pixar’s Coco

I was so excited to get an early copy of this DVD. We love to see all of the bonus features that are included. Often times, as with this Coco DVD, you get to see lots of behind-the-scenes featurettes. You also get to see cool things like deleted scenes that you won’t see anywhere else.

Below I’m sharing some of my favorite things from Pixar Coco’s DVD and Bluray set. 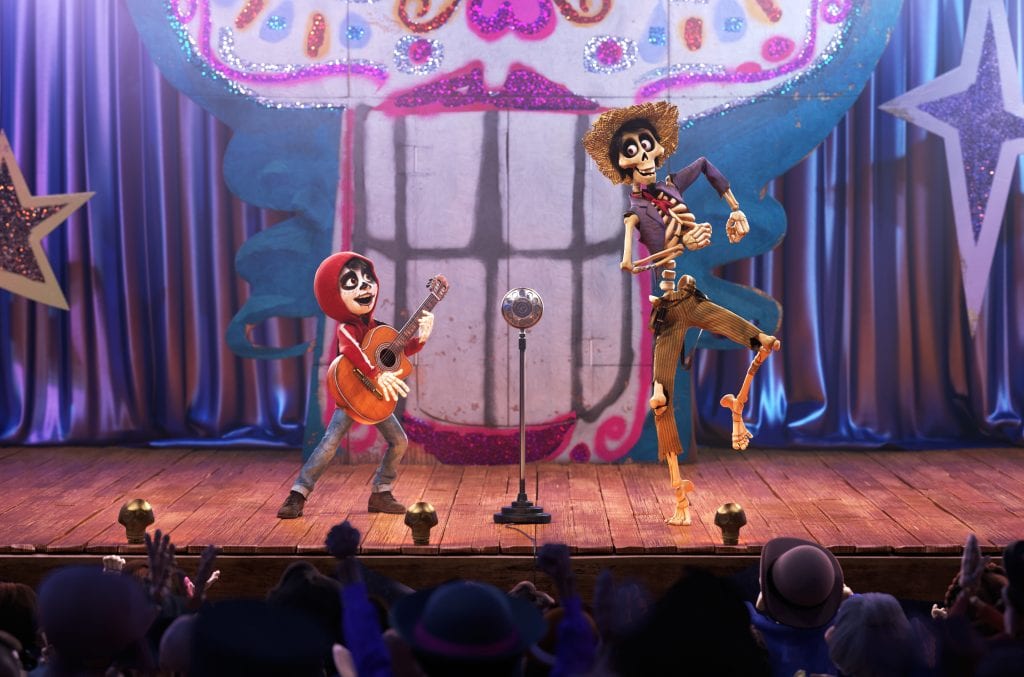 COCO (Pictured) – UN POCO LOCO – In Disney•Pixar’s “Coco,” aspiring musician Miguel (voice of Anthony Gonzalez) teams up with a charming trickster named Héctor (voice of Gael García Bernal) to unravel a generations-old family mystery. Their extraordinary journey through the Land of the Dead includes an unexpected talent show performance of “Un Poco Loco,” an original song in the son jarocho style of Mexican music written by co-director Adrian Molina and Germaine Franco for the film.

Did you know that Dante the dog is based on the national dog of Mexico? The Xolo dog is a Mexican dog that is known to connect to the living and the dead.

With the footage included in the DVD, we get a deep understanding of why Dante is in the film, as well as his true meaning and significance.

For example, nearly hairless, Xolos often have missing teeth. For that reason, their tongue naturally hangs out. Filmmakers included this detail in Dante’s design— his tongue behaves like a character itself.

GIVE THE DOG A BONE — An unlikely star of Disney•Pixar’s “Coco,” Dante is a Xolo dog—short for Xoloitzcuintle—the national dog of Mexico. Nearly hairless and missing some teeth, Dante has trouble keeping his tongue in his mouth. But he’s a loyal companion to Miguel, an aspiring musician who hopes to follow in the footsteps of his idol Ernesto de la Cruz. Featuring the voice of newcomer Anthony Gonzalez as Miguel and Benjamin Bratt as de la Cruz, “Coco” opens in theaters Nov. 22, 2017. ©2017 Disney•Pixar. All Rights Reserved.

I love to hear about how actors and actresses get cast for their roles. So when I saw that they included the surprise in here when they cast Anthony as the voice of Miguel, it was a treat!

They share a scene of Anthony doing a script reading. It was around Christmas so afterward, they presented him with an early Christmas gift.

When he opened the gift, it was a special framed graphic letting him know that he got the part! You just have to see it! Pixar truly made it a magical moment for him (be sure to grab your tissue…) and his mom who was there.

Progression Image 3 of 3: Final Frame..ASPIRING MUSICIAN — In Disney•Pixar’s “Coco,” Miguel (voice of newcomer Anthony Gonzalez) dreams of becoming an accomplished musician like the celebrated Ernesto de la Cruz (voice of Benjamin Bratt). But when he strums his idol’s guitar, he sets off a mysterious chain of events. Directed by Lee Unkrich, co-directed by Adrian Molina and produced by Darla K. Anderson, “Coco” opens in theaters Nov. 22, 2017.

I love learning about new cultures, especially with my own children. So when I saw they included a DIY in the bonus features, I was excited! Papel Picado (“perforated paper”, literally “pecked paper”) is a decorative craft made out of paper cut into beautiful and elaborate designs.

It is considered Mexican traditional art. No matter where you go, you’ll see it on the streets of Mexico. You can see them hanging in various, vibrant colors in the scene photo below. With the bonus features, you and your family can create your own papel picado. 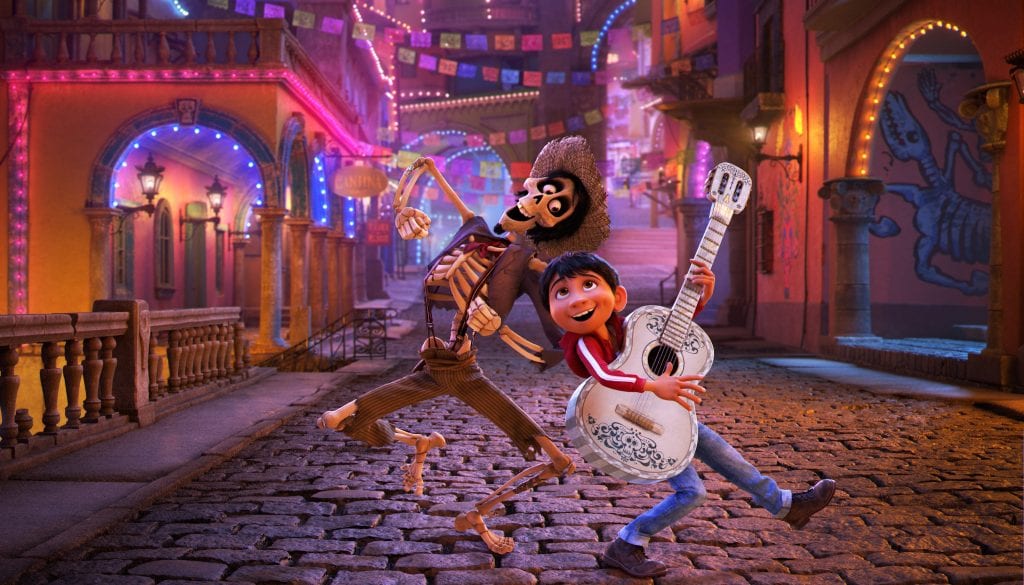 NAME THAT TUNE – In Disney•Pixar’s “Coco,” Miguel’s love of music ultimately leads him to the Land of the Dead where he teams up with charming trickster Hector. “Coco” features an original score from Oscar®-winning composer Michael Giacchino, the original song “Remember Me” by Kristen Anderson-Lopez and Robert Lopez, and additional songs co-written by Germaine Franco and co-director/screenwriter Adrian Molina. Also part of the team is musical consultant Camilo Lara of the music project Mexican Institute of Sound. In theaters on Nov. 22, 2017. © 2017 Disney•Pixar. All Rights Reserved.

There is bonus content included that tells the stories of the talent that worked to create this film. They share what they wanted to do as kids and what their interests were. The individuals also share their own personal stories about representation. This film means so much to Mexican/Mexican Americans and Latinos as a whole.

The stories were so touching and I could relate to a lot of what they were sharing. I felt much of the same when I watched Black Panther. Being able to see yourself and your culture represented on screen is indeed a powerful thing.

COCO (Pictured) – DON’T FORGET THE SHOES – In Disney•Pixar’s “Coco,” Abuelita (voice of Renée Victor) and Miguel (voice of Anthony Gonzalez) ensure that their home is adorned for Día de Muertos, including an elaborate ofrenda that holds several framed family pictures, flowers, candles, favorite foods and—because they are in the shoemaking business—shoes. ©2017 Disney•Pixar. All Rights Reserved.

I was amazed to find out that they had been working on the movie Coco for 6 years! Co-Director, Adrian Molina and Director, Lee Unkrich, both agreed that they wanted an entirely Latino cast. In the bonus features, they share some of the original storyboard sequencing used before final castings took place.

The song “Remember Me,” heard multiple times in the movie, was written by Kristen Anderson-Lopez and Robert Lopez, the team behind the Oscar®-winning song “Let It Go” from Walt Disney Animation Studios’ 2013 feature “Frozen.”

HIDDEN TALENT — In Disney•Pixar’s “Coco,” Miguel (voice of newcomer Anthony Gonzalez), who struggles against his family’s generations-old ban on music, creates a secret space where he can play his guitar and soak up the on-screen talent of his idol, Ernesto de la Cruz (voice of Benjamin Bratt). Directed by Lee Unkrich (“Toy Story 3”), co-directed by Adrian Molina (story artist “Monsters University”) and produced by Darla K. Anderson (“Toy Story 3”). ©2017 Disney•Pixar. All Rights Reserved.

There are a ton more features available when you purchase your Bluray/DVD copy of Pixar’s Coco, including this DIY rubber band guitar tutorial.

Check out the official trailer for Disney Pixar’s Coco

Disney’s Pixar Coco is out on DVD and Bluray TODAY, February 27th! 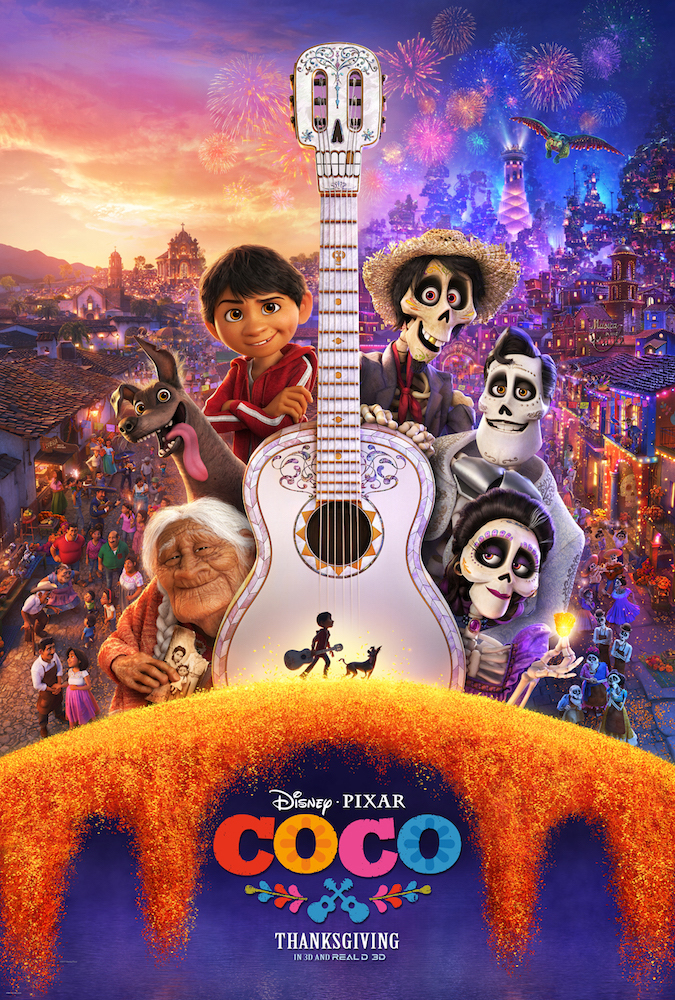 This trip to Disney in LA was sponsored. As always, all opinions are my own. 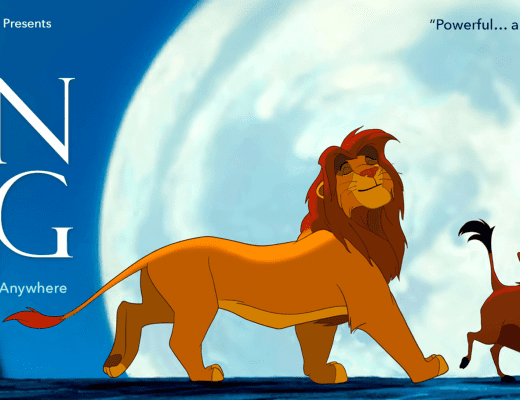 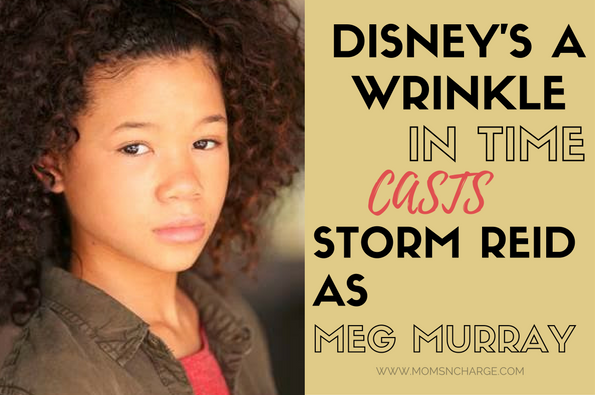 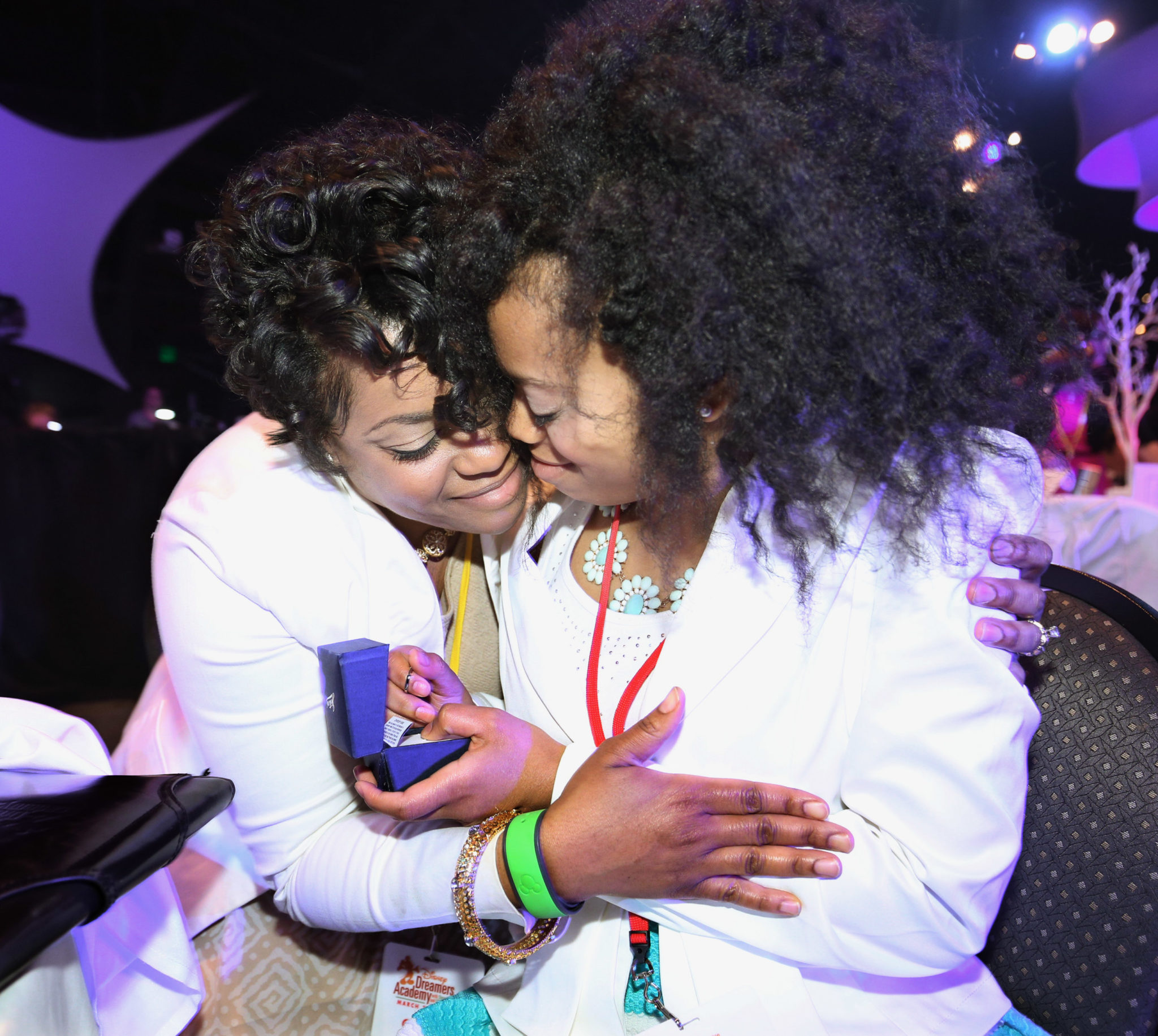