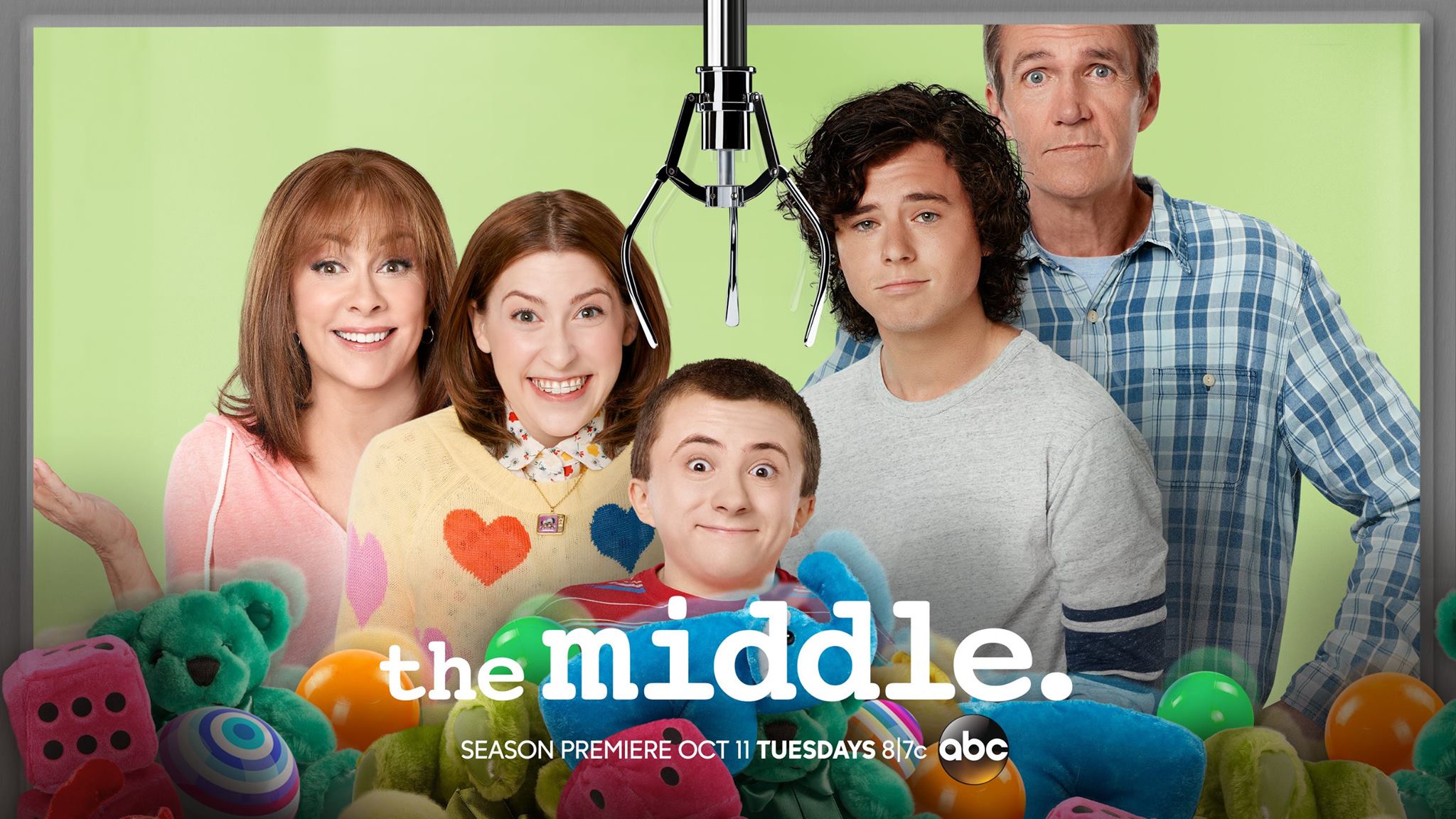 Tonight is the night! The Middle is in Season 8 and returns on a new night, Tuesday. You will definitely want to tune-in tonight at 8/7c. A few weeks ago, I mentioned I was heading to LA for the Queen of Katwe event. Well, a fun part of that trip was visiting the sets of various ABC TV shows. And The Middle just happened to be one of them! 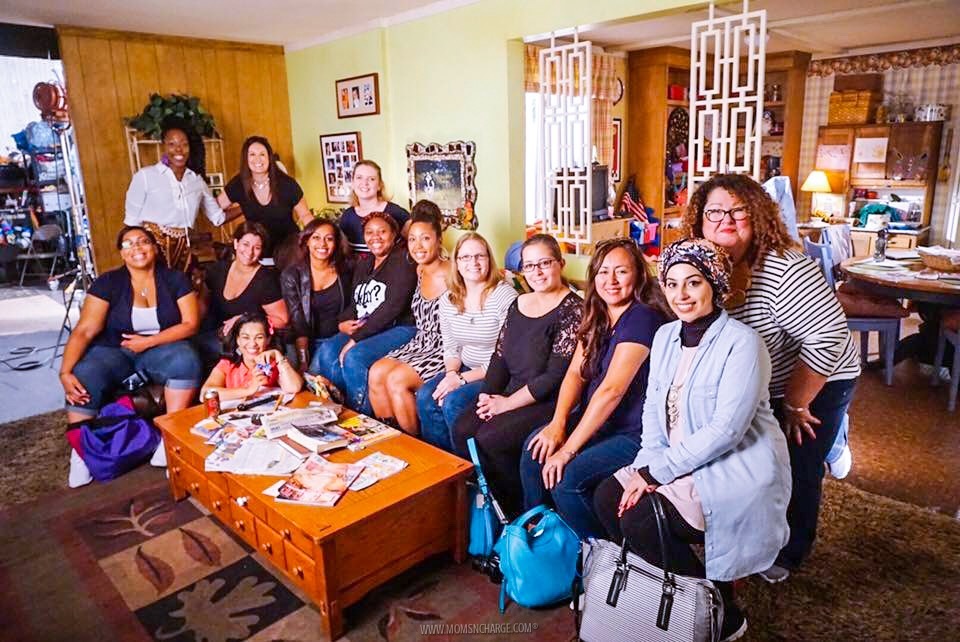 The Blogger Crew taking a quick pic on the set of The Middle. Photo credit: Deanna of HoneyAndLime.Co

This family is as fun off camera as on. It’s amazing to see the work that goes into shooting just one episode of a TV show. 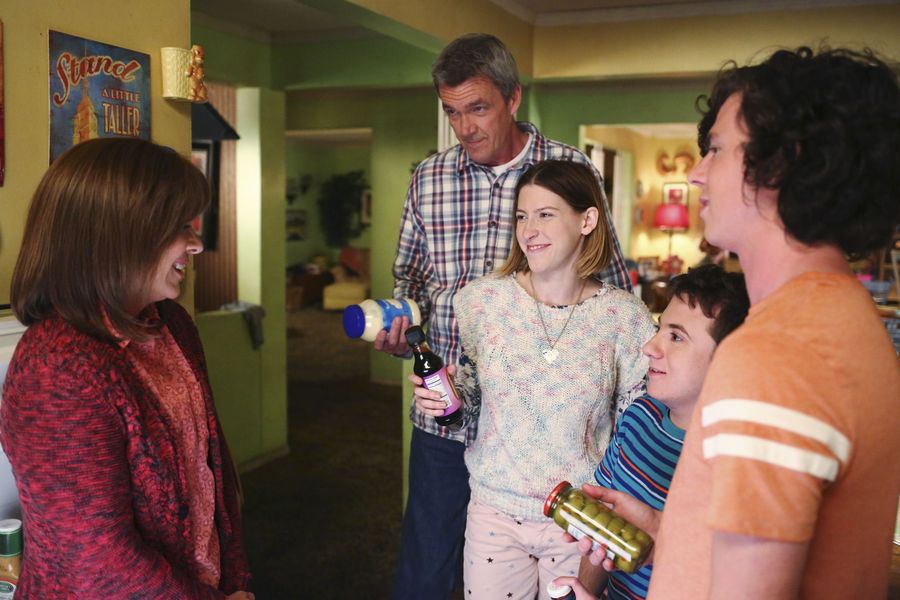 THE MIDDLE – “The Core Group” – Frankie and Mike are excited to meet April (Greer Grammer) – the love of Axl’s life – but discover that love may indeed be blind when April reveals a quirky personality trait. Meanwhile, after getting bit by the acting bug while working at Dollywood over the summer, Sue wants to change her major to theater, and Brick is starting high school and making it his mission to try for a fresh start and not be considered one of the weird kids, on the season premiere of “The Middle” on its new night, TUESDAY, OCTOBER 11 (8:00-8:30 p.m. EDT), on the ABC Television Network. (ABC/Michael Ansell)
PATRICIA HEATON, NEIL FLYNN, EDEN SHER, ATTICUS SHAFFER, CHARLIE MCDERMOTT

On the season premiere episode, “The Core Group,” Frankie and Mike are excited to meet April (Greer Grammer) – the love of Axl’s life – but discover that love may indeed be blind when April reveals a quirky personality trait. Meanwhile, after getting bit by the acting bug while working at Dollywood over the summer, Sue wants to change her major to theater, and Brick is starting high school and making it his mission to try for a fresh start and not be considered one of the weird kids. “The Middle” stars Patricia Heaton as Frankie, Neil Flynn as Mike, Charlie McDermott as Axl, Eden Sher as Sue and Atticus Shaffer as Brick.

Take a look at the preview:

In between touring the set of The Middle, and meeting the cast, we also go to walk on and tour their costume trailer. We spoke directly with the costume designer, Julia Caston, and she mentioned that they average about 65 wardrobe changes per episode! Woah! That’s a lot, but it explained all of the racks and racks of clothes 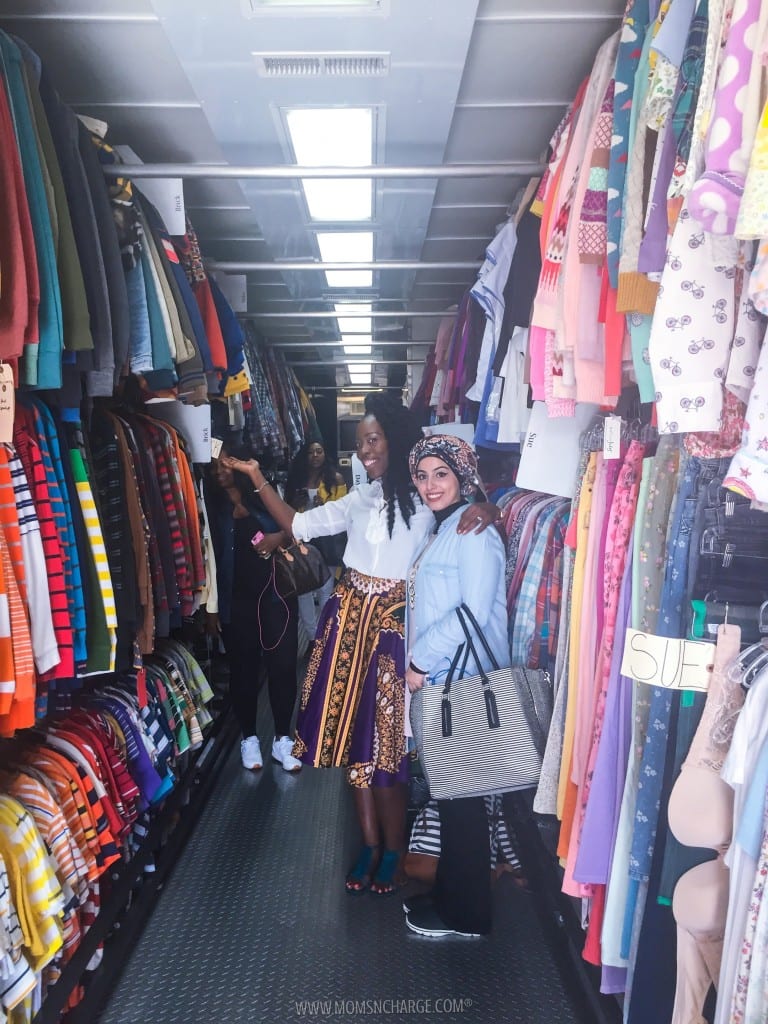 Posing in The Middle trailer with Aly Mashrah of TheMichiganMom.com

The costume designer picks what they wear but the cast doesn’t complain. It’s not a fashion show, so it’s what they feel comfortable in. There was an overflow from the trailer. So.many.clothes. 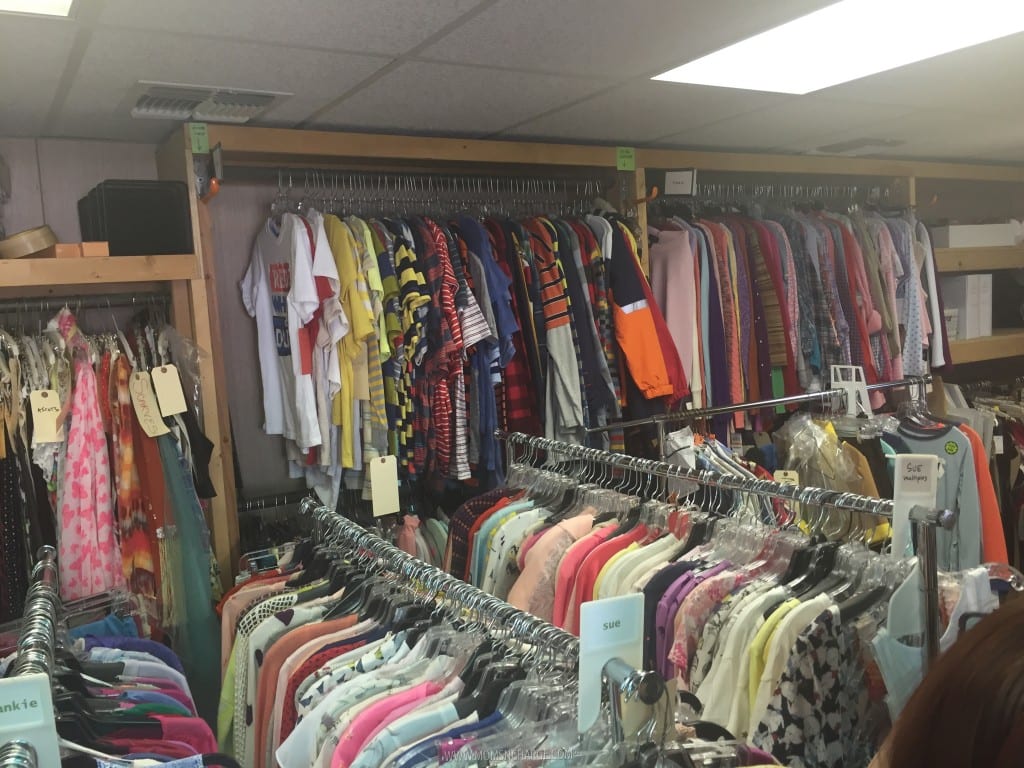 Why are there so many clothes?

Some clothes they keep multiples of because there are different stunt scenes. So she may buy 5-6 of one item to shoot one or more scenes. 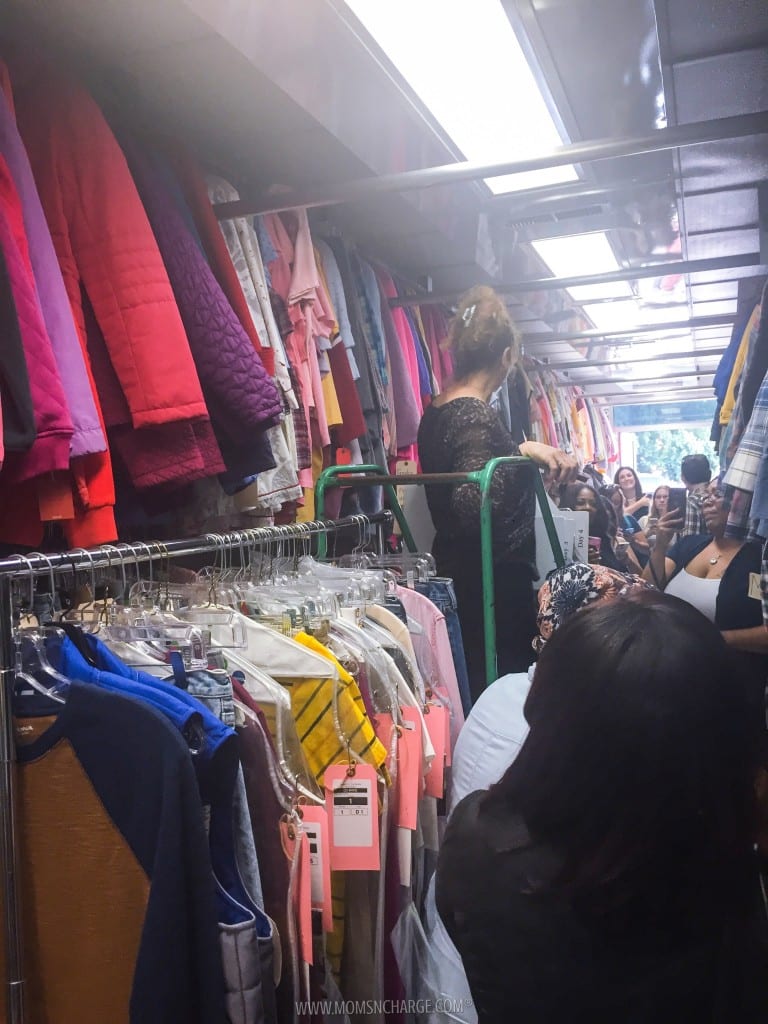 Every time they see something on camera, they take what is called a continuity picture. This allows them to go back if there’s been a mistake, or if they shoot scene 5 and 6 on different days (or later in the day), it’ll look like it was all shot on the same day. Everything goes into a software program to keep track of the items (every piece of clothing, jewelry, etc). 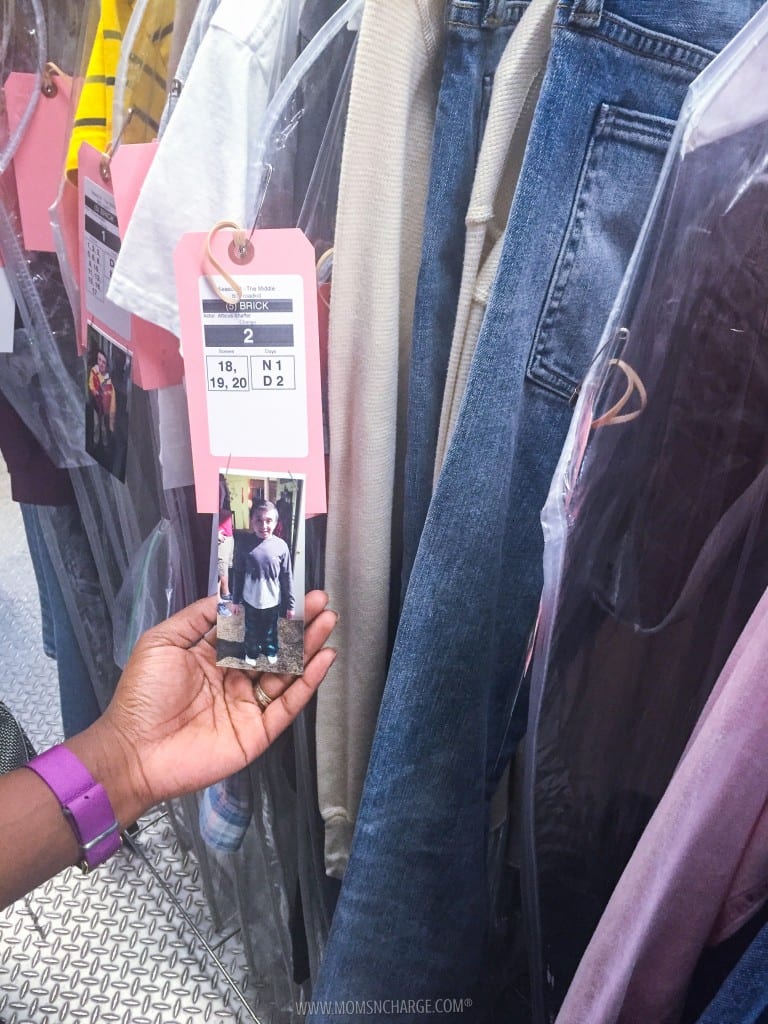 The Middle – Each item of clothing is catalogued in a software system. 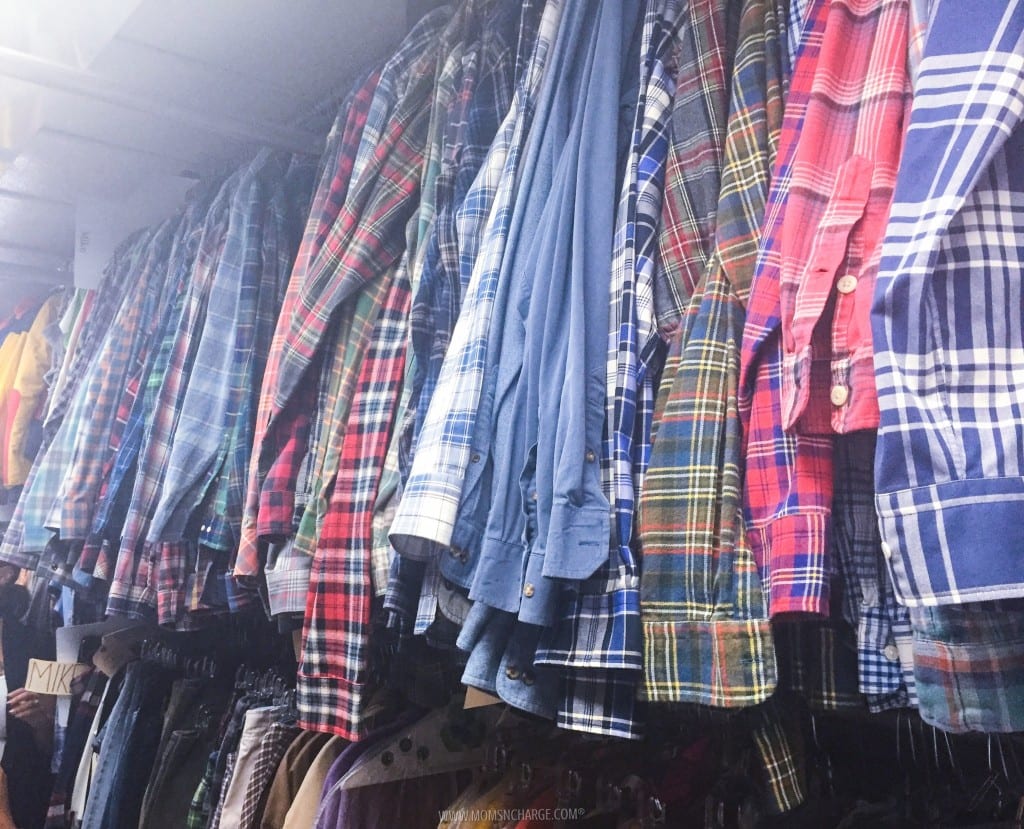 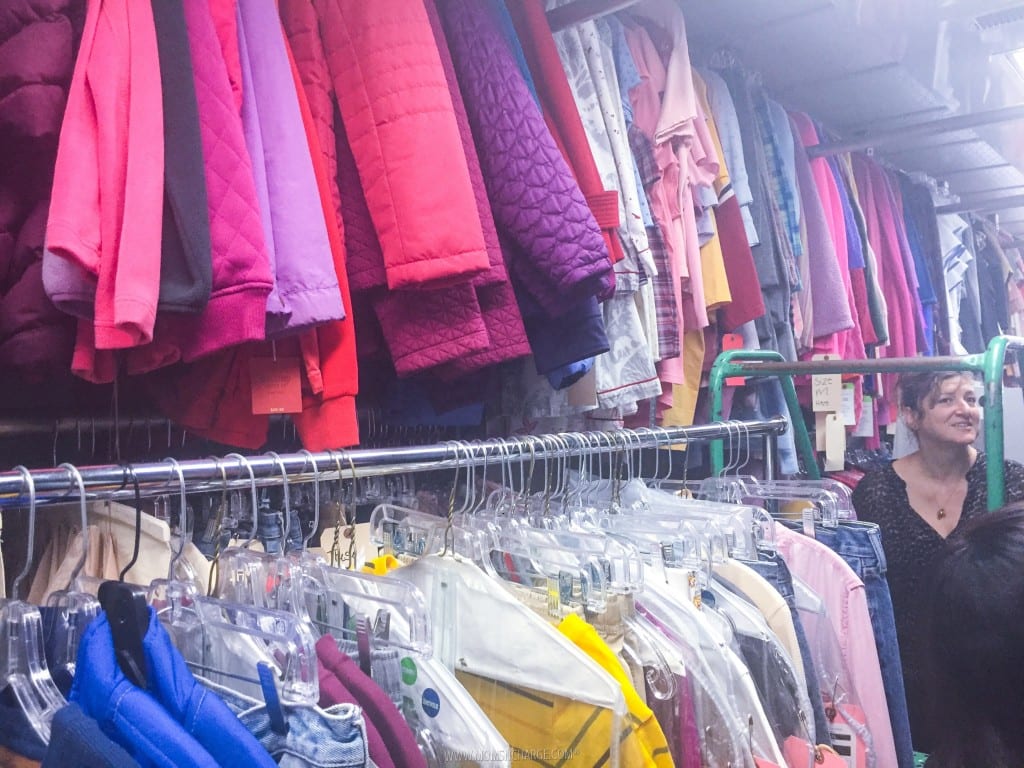 The Middle – Multiple items of clothing are often times purchased for the set.

We had a fun time touring the trailer and learning about the intricacies that go on behind-the-scenes of producing a show like The Middle. 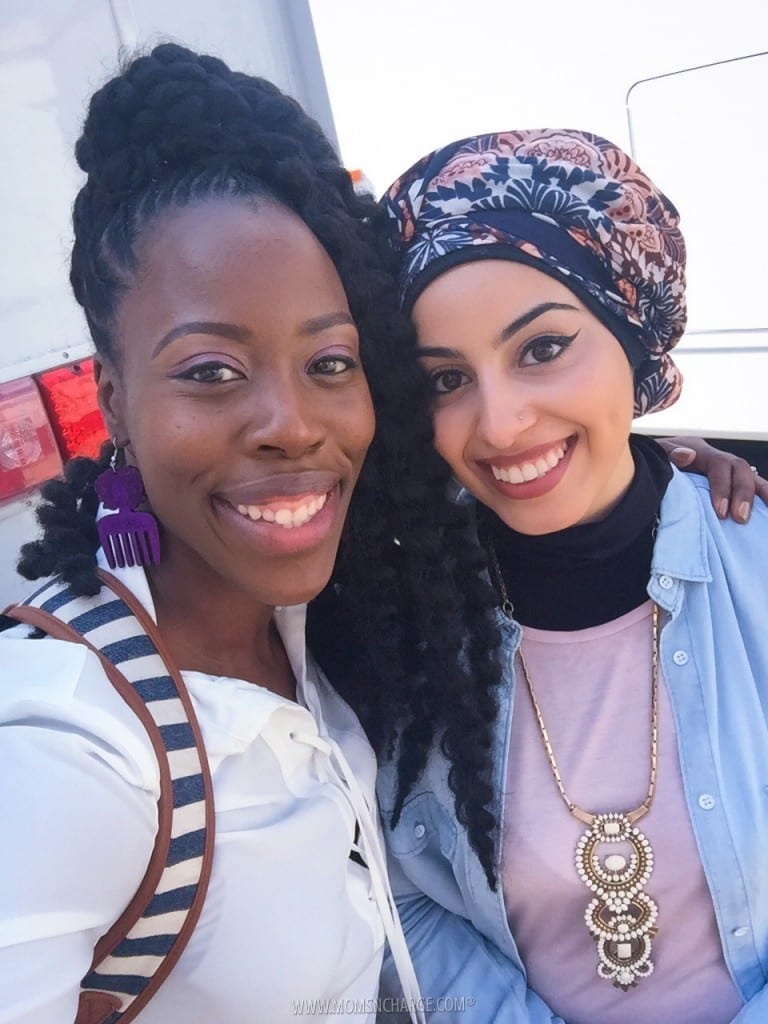 Posing in between tours with my new blogger boo Aly of TheMichiganMom.com 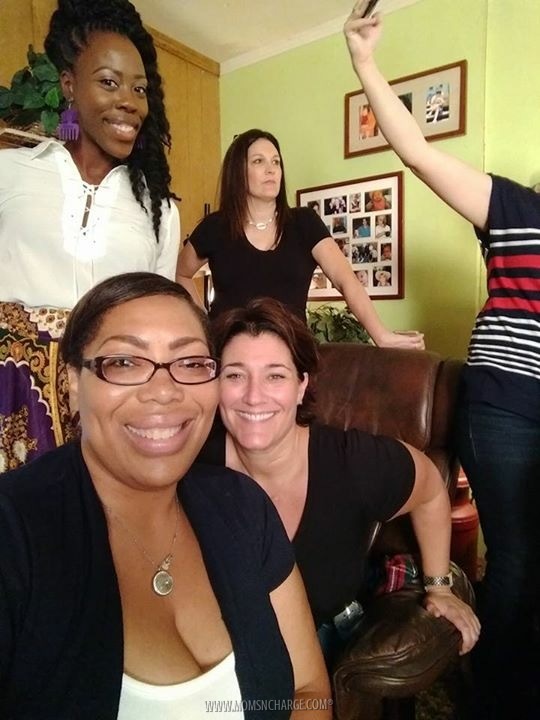 Goofing around on set while we wait for the rest of the bloggers to join us (Photo credit: Choya of JustASplashOfDiva.com)

So don’t forget: The Middle has moved to a new day (Tuesday)!

Tune in tonight for the Season 8 Premiere. Everyone needs a good laugh and this episode will do it for you. 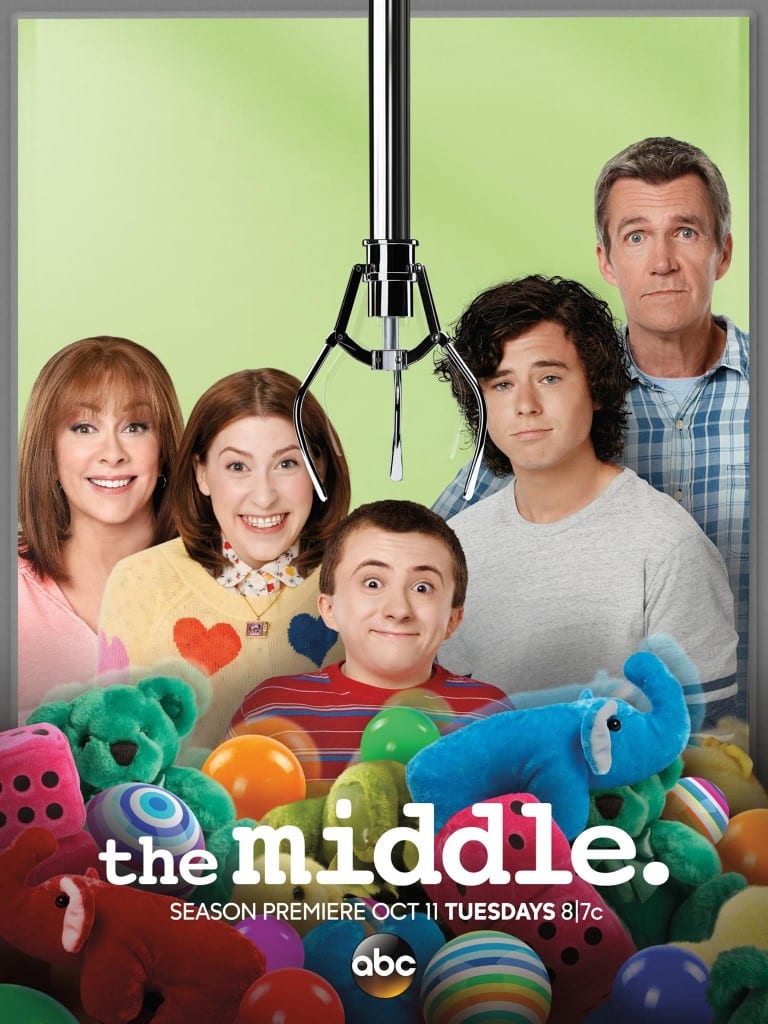 We had the opportunity to screen this first episode and it is definitely one to watch! This episode is funny and emotional. But then the funny parts will make you forget about the emotional LOL. And as if that’s not enough funny for you, the rest of the Tuesday night line-up will have you sticking around:

Katie and husband Greg (Diedrich Bader, “The Drew Carey Show”) have moved to Westport because the school district there is the best option for their youngest, Anna-Kat. Katie finds herself caught up in helping Anna-Kat fit in more while trying to assure that her older kids, Taylor and Oliver, immediately caught up in the luxe Westport lifestyle, fit in a little less. On top of this, Katie has her own insecurities about her place in their new town. Her perfectly imperfect world is upended when her neighbor’s decision to move notches her up from her ideal social standing and sets her on a path to ensure that doesn’t happen, regardless of the consequences. (Behind-the-scenes experience coming soon)

Louis flies the entire family to Taiwan in an effort to make things right with Gene (Ken Jeong). Upon meeting Gene’s beautiful fiancé, Margaret, and seeing the wonderful life he has built for himself, Louis questions whether his life in Orlando is just as great as it could be in Taiwan. Meanwhile, Jessica takes Eddie, Emery and Evan to her favorite childhood locales, including Dihua Street and Shilin Night Market

When Kenny, Jimmy and Shannon head back to school, Kenny decides to start the first LGBT club at St. Barklay’s in honor of National Coming Out Day. After only recruiting one meek lesbian named Allison, Kenny pressures her into coming out to her family and ultimately realizes everyone’s journey isn’t as easy as his own. Meanwhile, Eileen realizes she might have real feelings towards VP Murray, unfortunately, Pat also befriends him, which leads to an awkward situation. (Behind-the-scenes experience coming soon)

For more information on “The Middle,” visit The Middle online. You can also follow and connect with them on Facebook, Twitter: @TheMiddle_ABC and @ABC_Publicity. And you know all the fun is in following the Hashtag: #TheMiddle. 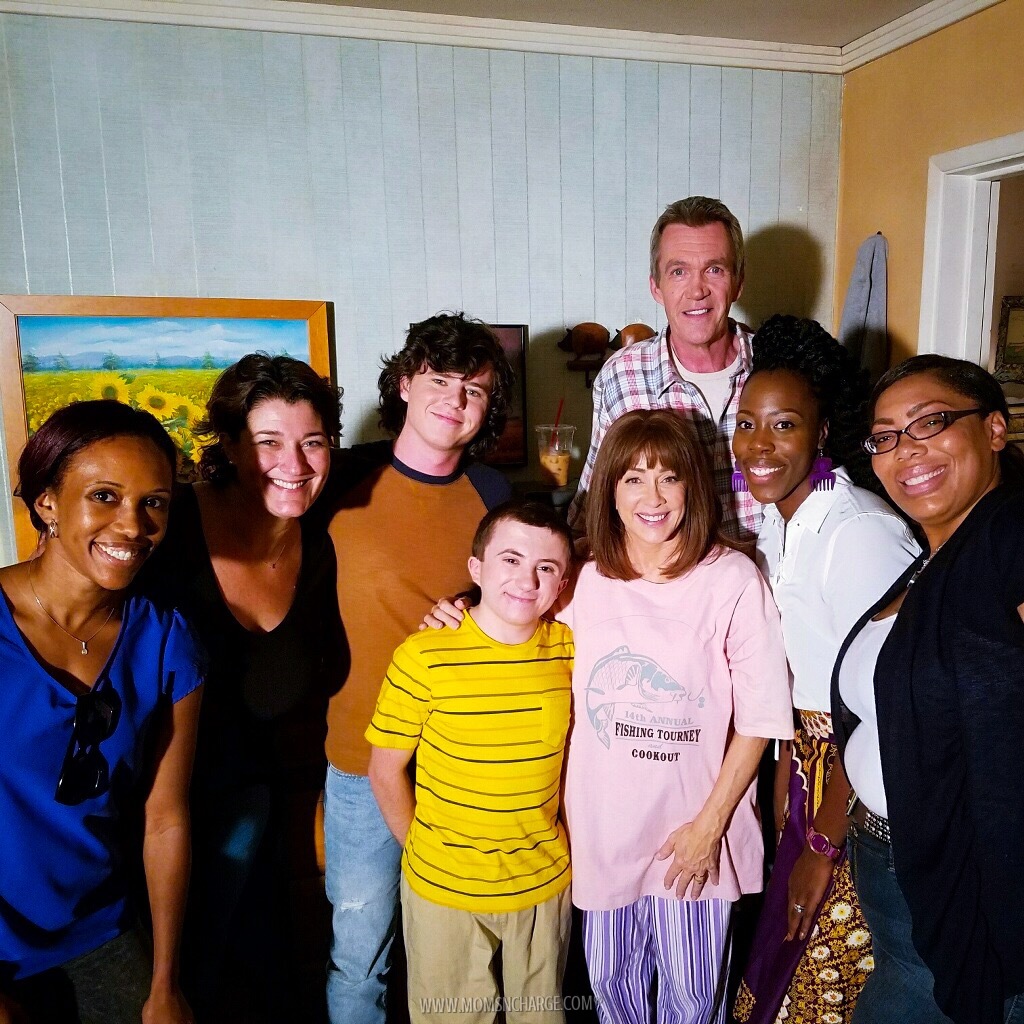 Posing with The Middle Family (we missed you, Sue). Photo credit: Dani Faust at OkDani.com

When you watch the episode, tweet and let me know what you think: @MomsNCharge. 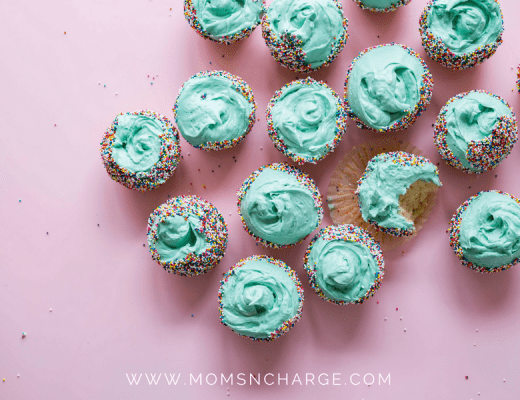 Mom – If Your Child Loves Baking They’ll Love This 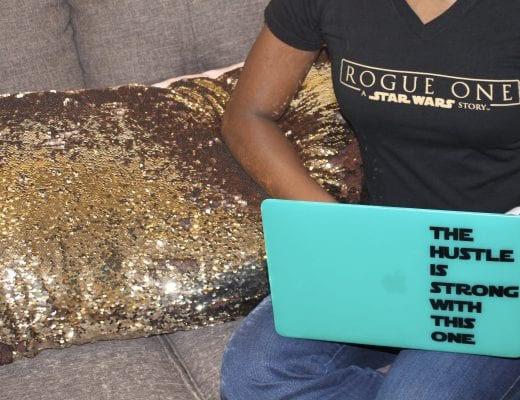 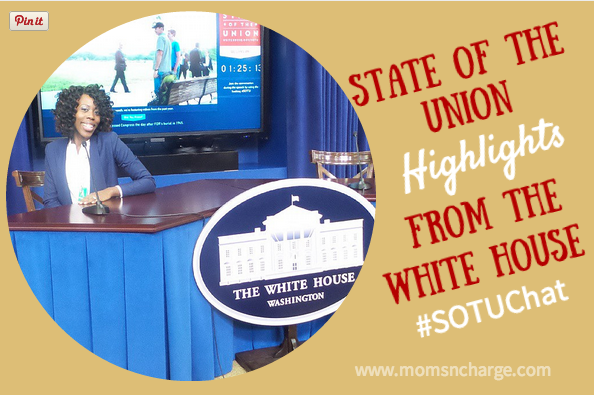 State of the Union Highlights Live from the White House